A Compilation of the Messages and Papers of the Presidents Volume 9, part 1: Benjamin Harrison 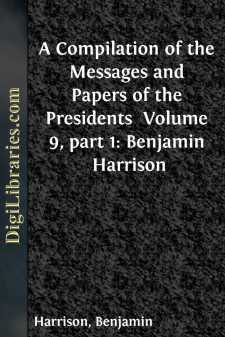 PROCLAMATIONS. BY THE PRESIDENT OF THE UNITED STATES OF AMERICA. A PROCLAMATION.

The following provisions of the laws of the United States are hereby published for the information of all concerned:

Section 1956, Revised Statutes, chapter 3, Title XXIII, enacts that— No person shall kill any otter, mink, marten, sable, or fur seal, or other fur-bearing animal within the limits of Alaska Territory or in the waters thereof; and every person guilty thereof shall for each offense be fined not less than $200 nor more than $1,000, or imprisoned not more than six months, or both; and all vessels, their tackle, apparel, furniture, and cargo, found engaged in violation of this section shall be forfeited; but the Secretary of the Treasury shall have power to authorize the killing of any such mink, marten, sable, or other fur-bearing animal, except fur seals, under such regulations as he may prescribe; and it shall be the duty of the Secretary to prevent the killing of any fur seal and to provide for the execution of the provisions of this section until it is otherwise provided by law, nor shall he grant any special privileges under this section.

Section 3 of the act entitled "An act to provide for the protection of the salmon fisheries of Alaska," approved March 2, 1889, provides that—

Now, therefore, I, Benjamin Harrison, President of the United States, pursuant to the above-recited statutes, hereby warn all persons against entering the waters of Bering Sea within the dominion of the United States for the purpose of violating the provisions of said section 1956, Revised Statutes; and I hereby proclaim that all persons found to be or have been engaged in any violation of the laws of the United States in said waters will be arrested and punished as above provided, and that all vessels so employed, their tackle, apparel, furniture, and cargoes, will be seized and forfeited.

In testimony whereof I have hereunto set my hand and caused the seal of the United States to be affixed.

Done at the city of Washington, this 21st day of March, 1889, and of the Independence of the United States the one hundred and thirteenth.