A Compilation of the Messages and Papers of the Presidents Volume 5, part 3: Franklin Pierce 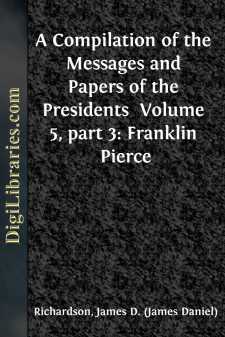 My Countrymen: It is a relief to feel that no heart but my own can know the personal regret and bitter sorrow over which I have been borne to a position so suitable for others rather than desirable for myself.

The circumstances under which I have been called for a limited period to preside over the destinies of the Republic fill me with a profound sense of responsibility, but with nothing like shrinking apprehension. I repair to the post assigned me not as to one sought, but in obedience to the unsolicited expression of your will, answerable only for a fearless, faithful, and diligent exercise of my best powers. I ought to be, and am, truly grateful for the rare manifestation of the nation's confidence; but this, so far from lightening my obligations, only adds to their weight. You have summoned me in my weakness; you must sustain me by your strength. When looking for the fulfillment of reasonable requirements, you will not be unmindful of the great changes which have occurred, even within the last quarter of a century, and the consequent augmentation and complexity of duties imposed in the administration both of your home and foreign affairs.

Whether the elements of inherent force in the Republic have kept pace with its unparalleled progression in territory, population, and wealth has been the subject of earnest thought and discussion on both sides of the ocean. Less than sixty-four years ago the Father of his Country made "the" then "recent accession of the important State of North Carolina to the Constitution of the United States" one of the subjects of his special congratulation. At that moment, however, when the agitation consequent upon the Revolutionary struggle had hardly subsided, when we were just emerging from the weakness and embarrassments of the Confederation, there was an evident consciousness of vigor equal to the great mission so wisely and bravely fulfilled by our fathers. It was not a presumptuous assurance, but a calm faith, springing from a clear view of the sources of power in a government constituted like ours. It is no paradox to say that although comparatively weak the new-born nation was intrinsically strong. Inconsiderable in population and apparent resources, it was upheld by a broad and intelligent comprehension of rights and an all-pervading purpose to maintain them, stronger than armaments. It came from the furnace of the Revolution, tempered to the necessities of the times. The thoughts of the men of that day were as practical as their sentiments were patriotic. They wasted no portion of their energies upon idle and delusive speculations, but with a firm and fearless step advanced beyond the governmental landmarks which had hitherto circumscribed the limits of human freedom and planted their standard, where it has stood against dangers which have threatened from abroad, and internal agitation, which has at times fearfully menaced at home. They proved themselves equal to the solution of the great problem, to understand which their minds had been illuminated by the dawning lights of the Revolution....