A Compilation of the Messages and Papers of the Presidents Volume 5, part 1: Presidents Taylor and Fillmore 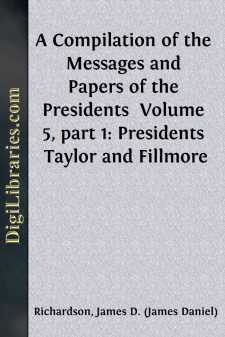 REPLY OF MR. FILLMORE. [From official records in the State Department.]

GENTLEMEN: I have just received your note conveying the melancholy and painful intelligence of the decease of Zachary Taylor, late President of the United States. I have no language to express the emotions of my heart. The shock is so sudden and unexpected that I am overwhelmed with grief.

I shall avail myself of the earliest moment to communicate this sad intelligence to Congress, and shall appoint a time and place for taking the oath of office prescribed to the President of the United States. You are requested to be present and witness the ceremony.

To the Senate of the United States:

In consequence of the lamented death of Zachary Taylor, late President of the United States, I shall no longer occupy the chair of the Senate, and I have thought that a formal communication to the Senate to that effect, through your Secretary, might enable you the more promptly to proceed to the choice of a presiding officer.

I have to perform the melancholy duty of announcing to you that it has pleased Almighty God to remove from this life Zachary Taylor, late President of the United States. He deceased last evening at the hour of half-past 10 o'clock, in the midst of his family and surrounded by affectionate friends, calmly and in the full possession of all his faculties. Among his last words were these, which he uttered with emphatic distinctness:

I have always done my duty. I am ready to die. My only regret is for the friends I leave behind me.

Having announced to you, fellow-citizens, this most afflicting bereavement, and assuring you that it has penetrated no heart with deeper grief than mine, it remains for me to say that I propose this day at 12 o'clock, in the Hall of the House of Representatives, in the presence of both Houses of Congress, to take the oath prescribed by the Constitution, to enable me to enter on the execution of the office which this event has devolved on me.

ANNOUNCEMENT TO REPRESENTATIVES OF THE UNITED STATES ABROAD. [From official records in the State Department] CIRCULAR.

Sir: It has become my most painful duty to announce to you the decease of Zachary Taylor, late President of the United States.

This afflicting event took place on the 9th instant at the Executive Mansion in this city, at thirty minutes after 10 o'clock in the evening....