A Compilation of the Messages and Papers of the Presidents Volume 3, part 1: Andrew Jackson (Second Term) 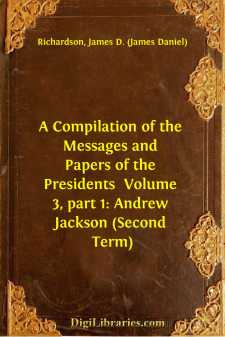 FELLOW-CITIZENS: The will of the American people, expressed through their unsolicited suffrages, calls me before you to pass through the solemnities preparatory to taking upon myself the duties of President of the United States for another term. For their approbation of my public conduct through a period which has not been without its difficulties, and for this renewed expression of their confidence in my good intentions, I am at a loss for terms adequate to the expression of my gratitude. It shall be displayed to the extent of my humble abilities in continued efforts so to administer the Government as to preserve their liberty and promote their happiness.

So many events have occurred within the last four years which have necessarily called forth—sometimes under circumstances the most delicate and painful—my views of the principles and policy which ought to be pursued by the General Government that I need on this occasion but allude to a few leading considerations connected with some of them.

The foreign policy adopted by our Government soon after the formation of our present Constitution, and very generally pursued by successive Administrations, has been crowned with almost complete success, and has elevated our character among the nations of the earth. To do justice to all and to submit to wrong from none has been during my Administration its governing maxim, and so happy have been its results that we are not only at peace with all the world, but have few causes of controversy, and those of minor importance, remaining unadjusted.

In the domestic policy of this Government there are two objects which especially deserve the attention of the people and their representatives, and which have been and will continue to be the subjects of my increasing solicitude. They are the preservation of the rights of the several States and the integrity of the Union.

These great objects are necessarily connected, and can only be attained by an enlightened exercise of the powers of each within its appropriate sphere in conformity with the public will constitutionally expressed. To this end it becomes the duty of all to yield a ready and patriotic submission to the laws constitutionally enacted, and thereby promote and strengthen a proper confidence in those institutions of the several States and of the United States which the people themselves have ordained for their own government.

My experience in public concerns and the observation of a life somewhat advanced confirm the opinions long since imbibed by me, that the destruction of our State governments or the annihilation of their control over the local concerns of the people would lead directly to revolution and anarchy, and finally to despotism and military domination. In proportion, therefore, as the General Government encroaches upon the rights of the States, in the same proportion does it impair its own power and detract from its ability to fulfill the purposes of its creation....