A Compilation of the Messages and Papers of the Presidents Volume 2, part 1: James Monroe 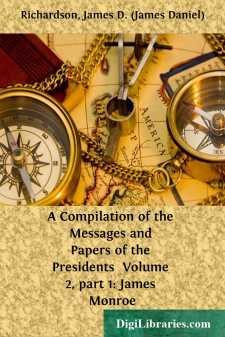 James Monroe was born April 28, 1758, in Westmoreland County, Va. He was the son of Spence Monroe and Elizabeth Jones, both natives of Virginia. When in his eighteenth year he enlisted as a private soldier in the Army to fight for independence; was in several battles, and was wounded in the engagement at Trenton; was promoted to the rank of captain of infantry. During 1777 and 1778 he acted as aid to Lord Stirling, and distinguished himself. He studied law under the direction of Thomas Jefferson, then governor of Virginia, who in 1780 appointed him to visit the army in South Carolina on an important mission. In 1782 he was elected to the Virginia assembly by the county of King George, and was by that body chosen a member of the executive council. The next year he was chosen a delegate to the Continental Congress, and remained a member until 1786; while a member he married a Miss Kortright, of New York City. Retiring from Congress, he began the practice of law at Fredericksburg, Va., but was at once elected to the legislature. In 1788 was a delegate to the State convention assembled to consider the Federal Constitution. Was a Senator from Virginia from 1790 to 1794. In May, 1794, was appointed by Washington minister to France. He was recalled in 1796 and was again elected to the legislature. In 1799 was elected governor of Virginia. In 1802 was appointed by President Jefferson envoy extraordinary to France, and in 1803 was sent to London as the successor of Rufus King. In 1805 performed a diplomatic mission to Spain in relation to the boundary of Louisiana, returning to London the following year; returned to the United States in 1808. In 1811 was again elected governor of his State, but in the same year resigned that office to become Secretary of State under President Madison. After the capture of Washington, in 1814, he was appointed to the War Department, which position he held until 1815, without relinquishing the office of Secretary of State. He remained at the head of the Department of State until the close of Mr. Madison's term. Was elected President in 1816, and reelected in 1820, retiring March 4, 1825, to his residence in Loudoun County, Va. In 1829 was elected a member of the convention called to revise the constitution of the State, and was unanimously chosen to preside over its deliberations. He was forced by ill health to retire from office, and removed to New York to reside with his son-in-law, Mr. Samuel L. Gouverneur. He died July 4, 1831, and was buried in New York City, but in 1858 his remains were removed to Richmond, Va.

LETTER FROM THE PRESIDENT ELECT.

The President of the Senate communicated the following letter from the President elect of the United States:

Hon. JOHN GAILLARD.President of the Senate of the United States.

SIR: I beg leave through you to inform the honorable Senate of the United States that I propose to take the oath which the Constitution prescribes to the President of the United States before he enters on the execution of his office on Tuesday, the 4th instant, at 12 o'clock, in the Chamber of the House of Representatives....