A Compilation of the Messages and Papers of the Presidents Volume 1, part 4: James Madison 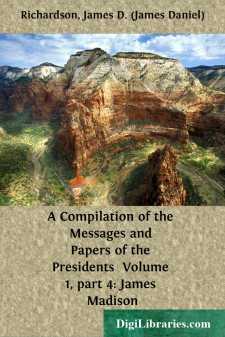 James Madison was born in King George County, Va., on the 16th of March, 1751. He was the son of James Madison, the family being of English descent, and among the early settlers of Virginia. Was fitted for college by private tutors, and entered Princeton College in 1769, graduating in 1771; remained a year at college pursuing his studies. After this he returned to Virginia and began the practice of law. In 1776 was elected a member of the general assembly of Virginia, and in 1778 was appointed a member of the executive council. In the winter of 1779-80 was chosen a delegate to the Continental Congress, of which body he continued an active and prominent member till 1784. The legislature of Virginia appointed him in 1786 a delegate to a convention at Annapolis, Md., to devise a system of commercial regulations for all the States. Upon their recommendation a convention of delegates from all the States was held in Philadelphia in May, 1787. This Convention framed the Constitution of the United States, and of it Mr. Madison was a leading member. He was next a member of the convention of his State which met to consider the new Constitution for the United States. Was a member of the House of Representatives in the First Congress, taking his seat in April, 1789, and continued to be a member of the House during both of Washington's terms as President. He married Mrs. Dolly Paine Todd, of Philadelphia, in 1794, she being the widow of a Pennsylvania lawyer. Her father was a Quaker, and had removed from Virginia to Philadelphia. Declined the office of Secretary of State, vacated by Jefferson, in 1793. He retired from Congress in 1797, and in 1798 accepted a seat in the Virginia assembly. In 1801 was appointed by President Jefferson Secretary of State, which office he held during the eight years of Jefferson's Administration. In 1808 was elected President, and was reelected in 1812. On March 4, 1817, he retired from public life, and passed the remainder of his days at Montpelier, in Orange County, Va. In 1829 was chosen a member of the State convention to revise the constitution of Virginia, and was also chosen president of an agricultural society in his county. He died on the 28th day of June, 1836, and was buried at his home.

LETTER FROM THE PRESIDENT ELECT.

The President of the Senate communicated the following letter from the President elect of the United States:

SIR: I beg leave through you to inform the honorable the Senate of the United States that I propose to take the oath which the Constitution prescribes to the President of the United States before he enters on the execution of his office on Saturday, the 4th instant, at 12 o'clock, in the Chamber of the House of Representatives.

I have the honor to be, with the greatest respect, sir, your most obedient and most humble servant,

Unwilling to depart from examples of the most revered authority, I avail myself of the occasion now presented to express the profound impression made on me by the call of my country to the station to the duties of which I am about to pledge myself by the most solemn of sanctions....