A Compilation of the Messages and Papers of the Presidents Volume 1, part 3: Thomas Jefferson 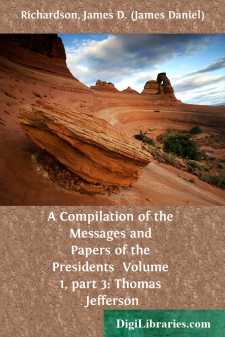 Thomas Jefferson was born at Shadwell, Albemarle County, Va., on April 2 (old style), 1743. He was the oldest son of Peter Jefferson, who died in 1757. After attending private schools, he entered William and Mary College in 1760. In 1767 began the practice of the law. In 1769 was chosen to represent his county in the Virginia house of burgesses, a station he continued to fill up to the period of the Revolution. He married Mrs. Martha Skelton in 1772, she being a daughter of John Wayles, an eminent lawyer of Virginia. On March 12, 1773, was chosen a member of the first committee of correspondence established by the Colonial legislature. Was elected a delegate to the Continental Congress in 1775; was placed on the Committee of Five to prepare the Declaration of Independence, and at the request of that committee he drafted the Declaration, which, with slight amendments, was adopted July 4, 1776. Resigned his seat in Congress and occupied one in the Virginia legislature in October, 1776. Was elected governor of Virginia by the legislature on June 1, 1779, to succeed Patrick Henry. Retired to private life at the end of his term as governor, but was the same year elected again to the legislature. Was appointed commissioner with others to negotiate treaties with France in 1776, but declined. In 1782 he was appointed by Congress minister plenipotentiary to act with others in Europe in negotiating a treaty of peace with Great Britain. Was again elected a Delegate to Congress in 1783, and as a member of that body he advocated and had adopted the dollar as the unit and the present system of coins and decimals. In May, 1784, was appointed minister plenipotentiary to Europe to assist John Adams and Benjamin Franklin in negotiating treaties of commerce. In March, 1785, was appointed by Congress minister at the French Court to succeed Dr. Franklin, and remained in France until September, 1789. On his arrival at Norfolk, November 23, 1789, received a letter from Washington offering him the appointment of Secretary of State in his Cabinet. Accepted and became the first Secretary of State under the Constitution. December 31, 1793, resigned his place in the Cabinet and retired to private life at his home. In 1796 was brought forward by his friends as a candidate for President, but Mr. Adams, receiving the highest number of votes, was elected President, and Jefferson became Vice-President for four years from March 4, 1797. In 1800 was again voted for by his party for President. He and Mr. Burr received an equal number of electoral votes, and under the Constitution the House of Representatives was called upon to elect. Mr. Jefferson was chosen on the thirty-sixth ballot. Was reelected in 1804, and retired finally from public life March 4, 1809. He died on the 4th day of July, 1826, and was buried at Monticello, Va.

The committee beg leave to express their wishes for the prosperity of your Administration and their sincere desire that it may promote your own happiness and the welfare of our country....