A Compilation of the Messages and Papers of the Presidents Volume 1, part 2: John Adams 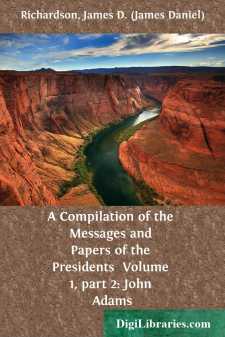 John Adams was born on October 19 (old style), 1735, near Boston, Mass., in the portion of the town of Braintree which has since been incorporated as Quincy. He was fourth in descent from Henry Adams, who fled from persecution in Devonshire, England, and settled in Massachusetts about 1630. Another of his ancestors was John Adams, a founder of the Plymouth Colony in 1620. Entered Harvard College in 1751, and graduated therefrom four years later. Studied the law and taught school at Worcester; was admitted to the bar of Suffolk County in 1758. In 1768 removed to Boston, where he won distinction at the bar. In 1764 married Abigail Smith, whose father was Rev. William Smith and whose grandfather was Colonel Quincy. In 1770 was chosen a representative from Boston in the legislature of Massachusetts. In 1774 was a member of the Continental Congress, and in 1776 was the adviser and great supporter of the Declaration of Independence. The same year was a deputy to treat with Lord Howe for the pacification of the Colonies. He declined the offer of chief justice of Massachusetts. In December, 1777, was appointed a commissioner to France, and returned home in the summer of 1779. He was then chosen a member of the Massachusetts convention for framing a State constitution. On September 29, 1779, was appointed by Congress minister plenipotentiary to negotiate a peace treaty with Great Britain. In 1781 was a commissioner to conclude treaties of peace with European powers. In 1783 negotiated with others a commercial treaty with Great Britain. Was one of the commissioners to sign the provisional treaty of peace with that nation November 30, 1782, and the definite treaty September 3, 1783. In 1784 remained in Holland, and in 1785 was by Congress appointed minister of the United States at the Court of Great Britain. He returned to his home in June, 1788. Was chosen Vice-President on the ticket with Washington, and on the assembling of the Senate took his seat as President of that body, at New York in April, 1789. Was reelected Vice-President in 1792. On the retirement of Washington in 1796 he was elected President, and was inaugurated March 4, 1797. He retired March 4, 1801, to his home at Quincy, Mass. In 1816 was chosen to head the list of Presidential electors of his party in the State. Was a member of the State convention to revise the constitution of Massachusetts; was unanimously elected president of that convention, but declined it on account of his age. His wife died in 1818. On July 4, 1826, he died, and was buried at Quincy.

INAUGURAL ADDRESS. IN THE CITY OF PHILADELPHIA, PA

When it was first perceived, in early times, that no middle course for America remained between unlimited submission to a foreign legislature and a total independence of its claims, men of reflection were less apprehensive of danger from the formidable power of fleets and armies they must determine to resist than from those contests and dissensions which would certainly arise concerning the forms of government to be instituted over the whole and over the parts of this extensive country....