A Compilation of the Messages and Papers of the Presidents Section 1 (of 3) of Volume 10. 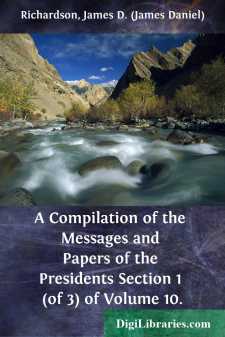 The President of the United States came into the Senate Chamber, attended by General Knox, and laid before the Senate the following state of facts, with the questions thereto annexed, for their advice and consent:

"To conciliate the powerful tribes of Indians in the southern district, amounting probably to 14,000 fighting men, and to attach them firmly to the United States, may be regarded as highly worthy of the serious attention of Government.

"The measure includes not only peace and security to the whole southern frontier, but is calculated to form a barrier against the colonies of a European power which in the mutations of policy may one day become the enemy of the United States. The fate of the Southern States, therefore, or the neighboring colonies may principally depend on the present measures of the Union toward the southern Indians.

"By the papers which have been laid before the Senate it will appear that in the latter end of the year 1785 and the beginning of 1786 treaties were formed by the United States with the Cherokees, the Chickesaws, and Choctaws. The report of the commissioners will show the reasons why a treaty was not formed at the same time with the Creeks.

"The opinion of the late Congress respecting the said violation will sufficiently appear by the proclamation which they caused to be issued on the 1st of September, 1788.

"By the public newspapers it appears that on the 16th of June last a truce was concluded with the Cherokees by Mr. John Steele on behalf of the State of North Carolina, in which it was stipulated that a treaty should be held as soon as possible and that in the meantime all hostilities should cease on either side.

"As the Cherokees reside principally within the territory claimed by North Carolina, and as that State is not a member of the present Union, it may be doubted whether any efficient measures in favor of the Cherokees could be immediately adopted by the General Government.

"The commissioners for negotiating with the southern Indians may be instructed to transmit a message to the Cherokees, stating to them as far as may be proper the difficulties arising from the local claims of North Carolina, and to assure them that the United States are not unmindful of the treaty at Hopewell, and as soon as the difficulties which are at present opposed to the measure shall be removed the Government will do full justice to the Cherokees.

"The distance of the Choctaws and Chickesaws from the frontier settlements seems to have prevented those tribes from being involved in similar difficulties with the Cherokees.

"The commissioners may be instructed to transmit messages to the said tribes containing assurances of the continuance of the friendship of the United States and that measures will soon be taken for extending a trade to them agreeably to the treaties of Hopewell....