A Color Notation A measured color system, based on the three qualities Hue, Value and Chroma

by A. H. (Albert Henry) Munsell 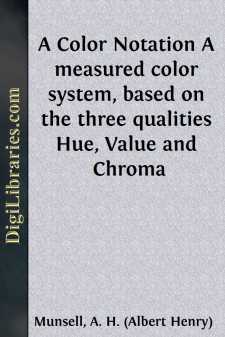 Writing from Samoa to Sidney Colvin in London, Stevenson says: “Perhaps in the same way it might amuse you to send us any pattern of wall paper that might strike you as cheap, pretty, and suitable for a room in a hot and extremely bright climate. It should be borne in mind that our climate can be extremely dark, too. Our sitting-room is to be in varnished wood. The room I have particularly in mind is a sort of bed and sitting room, pretty large, lit on three sides, and the colour in favour of its proprietor at present is a topazy yellow. But then with what colour to relieve it? For a little work-room of my own at the back I should rather like to see some patterns of unglossy—well, I’ll be hanged if I can describe this red. It’s not Turkish, and it’s not Roman, and it’s not Indian; but it seems to partake of the last two, and yet it can’t be either of them, because it ought to be able to go with vermilion. Ah, what a tangled web we weave! Anyway, with what brains you have left choose me and send me some—many—patterns of the exact shade.”

(1) Where could be found a more delightful cry for some rational way to describe color? He wants “a topazy yellow” and a red that is not Turkish nor Roman nor Indian, but that “seems to partake of the last two, and yet it can’t be either of them.” As a cap to the climax comes his demand for “patterns of the exact shade.” Thus one of the clearest and most forceful writers of English finds himself unable to describe the color he wants. And why? Simply because popular language does not clearly state a single one of the three qualities united in every color, and which must be known before one may even hope to convey his color conceptions to another.

(2) The incongruous and bizarre nature of our present color names must appear to any thoughtful person. Baby blue, peacock blue, Nile green, apple green, lemon yellow, straw yellow, rose pink, heliotrope, royal purple, Magenta, Solferino, plum, and automobile are popular terms, conveying different ideas to different persons and utterly failing to define colors. The terms used for a single hue, such as pea green, sea green, olive green, grass green, sage green, evergreen, invisible green, are not to be trusted in ordering a piece of cloth. They invite mistakes and disappointment. Not only are they inaccurate: they are inappropriate. Can we imagine musical tones called lark, canary, cockatoo, crow, cat, dog, or mouse, because they bear some distant resemblance to the cries of those animals? See paragraph .

(3) Music is equipped with a system by which it defines each sound in terms of its pitch, intensify, and duration, without dragging in loose allusions to the endlessly varying sounds of nature. So should color be supplied with an appropriate system, based on the hue, value, and chroma of our sensations, and not attempting to describe them by the indefinite and varying colors of natural objects. The system now to be considered portrays the three dimensions of color, and measures each by an appropriate scale....