A Collection of Stories, Reviews and Essays 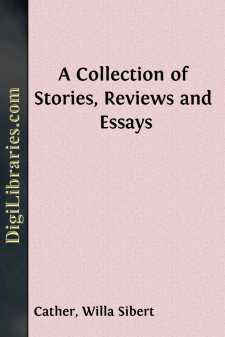 “No, Antone, I have told thee many times, no, thou shalt not sell it until I am gone.”

“But I need money; what good is that old fiddle to thee? The very crows laugh at thee when thou art trying to play. Thy hand trembles so thou canst scarce hold the bow. Thou shalt go with me to the Blue to cut wood to-morrow. See to it thou art up early.”

“What, on the Sabbath, Antone, when it is so cold? I get so very cold, my son, let us not go to-morrow.”

“Yes, to-morrow, thou lazy old man. Do not I cut wood upon the Sabbath? Care I how cold it is? Wood thou shalt cut, and haul it too, and as for the fiddle, I tell thee I will sell it yet.” Antone pulled his ragged cap down over his low heavy brow, and went out. The old man drew his stool up nearer the fire, and sat stroking his violin with trembling fingers and muttering, “Not while I live, not while I live.”

Five years ago they had come here, Peter Sadelack, and his wife, and oldest son Antone, and countless smaller Sadelacks, here to the dreariest part of south-western Nebraska, and had taken up a homestead. Antone was the acknowledged master of the premises, and people said he was a likely youth, and would do well. That he was mean and untrustworthy every one knew, but that made little difference. His corn was better tended than any in the county, and his wheat always yielded more than other men’s.

Of Peter no one knew much, nor had any one a good word to say for him. He drank whenever he could get out of Antone’s sight long enough to pawn his hat or coat for whiskey. Indeed there were but two things he would not pawn, his pipe and his violin. He was a lazy, absent minded old fellow, who liked to fiddle better than to plow, though Antone surely got work enough out of them all, for that matter. In the house of which Antone was master there was no one, from the little boy three years old, to the old man of sixty, who did not earn his bread. Still people said that Peter was worthless, and was a great drag on Antone, his son, who never drank, and was a much better man than his father had ever been. Peter did not care what people said. He did not like the country, nor the people, least of all he liked the plowing. He was very homesick for Bohemia. Long ago, only eight years ago by the calendar, but it seemed eight centuries to Peter, he had been a second violinist in the great theatre at Prague. He had gone into the theatre very young, and had been there all his life, until he had a stroke of paralysis, which made his arm so weak that his bowing was uncertain. Then they told him he could go. Those were great days at the theatre. He had plenty to drink then, and wore a dress coat every evening, and there were always parties after the play. He could play in those days, ay, that he could! He could never read the notes well, so he did not play first; but his touch, he had a touch indeed, so Herr Mikilsdoff, who led the orchestra, had said. Sometimes now Peter thought he could plow better if he could only bow as he used to....