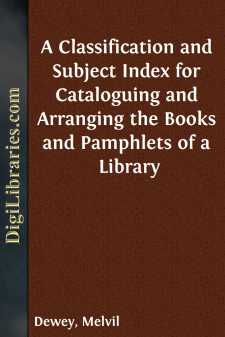 The plan of the following Classification and Index was developed early in 1873. It was the result of several months' study of library economy as found in some hundreds of books and pamphlets, and in over fifty personal visits to various American libraries. In this study, the author became convinced that the usefulness of these libraries might be greatly increased without additional expenditure. Three years practical use of the system here explained, leads him to believe that it will accomplish this result; for with its aid, the catalogues, shelf lists, indexes, and cross-references essential to this increased usefulness, can be made more economically than by any other method which he has been able to find. The system was devised for cataloguing and indexing purposes, but it was found on trial to be equally valuable for numbering and arranging books and pamphlets on the shelves.

The library is first divided into nine special libraries which are called Classes. These Classes are Philosophy, Theology, &c., and are numbered with the nine digits. Thus Class 9 is the Library of History; Class 7, the Library of Fine Art; Class 2, the Library of Theology. These special libraries or Classes are then considered independently, and each one is separated again into nine special Divisions of the main subject. These Divisions are numbered from 1 to 9 as were the Classes. Thus 59 is the 9th Division (Zoology) of the 5th Class (Natural Science). A final division is then made by separating each of these Divisions into nine Sections which are numbered in the same way, with the nine digits. Thus 513 is the 3d Section (Geometry) of the 1st Division (Mathematics) of the 5th Class (Natural Science). This number, giving Class, Division, and Section, is called the Classification or Class Number, and is applied to every book or pamphlet belonging to the library. All the Geometries are thus numbered 513, all the Mineralogies 549, and so throughout the library, all the books on any given subject bear the number of that subject in the scheme. Where a 0 occurs in a class number, it has its normal zero power. Thus, a book numbered 510, is Class 5, Division 1, but no Section. This signifies that the book treats of the Division 51 (Mathematics) in general, and is not limited to any one Section, as is the Geometry, marked 513. If marked 500, it would indicate a treatise on Science in general, limited to no Division. A zero occurring in the first place would in the same way show that the book is limited to no Class. The classification is mainly made by subjects or content regardless of form; but it is found practically useful to make an additional distinction in these general treatises, according to the form of treatment adopted. Thus, in Science we have a large number of books treating of Science in general, and so having a 0 for the Division number. These books are then divided into Sections, as are those of the other Classes according to the form they have taken on. We have the Philosophy and History of Science, Scientific Compends, Dictionaries, Essays, Periodicals, Societies, Education, and Travels,--all having the common subject, NATURAL SCIENCE, but treating it in these varied forms....