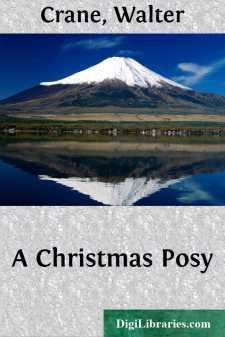 A FRAGMENT Part I "Those never lovedWho dream that they 'loved once.'"—E. B. Browning. "You won't be long any way, dear Auntie?" said Sylvia with a little sigh. "I don't half like your going. Couldn't you wait till the day after to-morrow?"

"Or at least take me with you," said Molly, Sylvia's younger sister, eagerly.

Auntie hesitated—she glanced up at as much of the sky as could be seen through the lace-shrouded windows of their pretty Paris salon—it was already beginning to grow dusky, for though only half-past three, it was the thirty-first of December, and a dull day—and then turned with decision towards the door.

"No, dears," she said; "I shall go more quickly alone. Sylvia's cold would be none the better for going out so late, and I would rather you, Molly, stayed with her. So good-bye, darlings; I shall not be long."

"I should not like to think of poor Sylvia sitting alone in the gloaming, to-day of all days," said Auntie to herself as she made her way down the three flights of handsome marble stairs which led to their appartement. "I can see she is very sad—remembering how different it was this day last year. And dear Molly's good spirits are an inestimable blessing. Ah, my darlings, I may do my best, I will do my best, but I cannot make up to you for grandmother;" and with the tears in her eyes, and many a tender thought in her heart, Auntie made her way along the street.

The two girls were watching her, though she did not know it. There was a tiny balcony outside the window on to which Molly stepped almost as soon as the door had closed on Auntie.

"Come out here for a moment, Sylvia," she called to her sister; "we can see her as far as the corner"—for the street was one of the wide handsome avenues in the new part of Paris, and there were few passers-by. "As far as the corner," therefore, it was easy to distinguish Auntie's figure in its deep mourning dress—not quite so erect or active as it used to be, for Auntie was no longer young, and this year, so nearly ended now, had brought her the greatest sorrow of her life—as she quickly made her way.

"Dear Auntie," said Sylvia; "I wish she were back again. I am sure we could have done without money for a day."

"Two days it would have been," corrected Molly; "the bank will be closed to-morrow, you know."

"Of course I know that," said Sylvia, a little testily.

"And there are some people coming to be paid, and Auntie never likes to keep any one waiting," continued Molly imperturbably. "If Auntie had only taken me with her——"

"How absurd you are!" said Sylvia. "You speak as if Auntie were a baby, or as if no one could take care of her but you—no, dear," she broke off hastily, "I should not speak like that. I don't mean to be cross—but oh, Molly, how we do miss grandmother," and the quickly rising tears in the pretty eyes raised to her sister's face at once subdued any resentment Molly may have felt. She bent her tall figure—for, though nearly two years younger, she was taller than her sister—and enveloped Sylvia in a loving hug....