A Christmas Mystery The Story of Three Wise Men 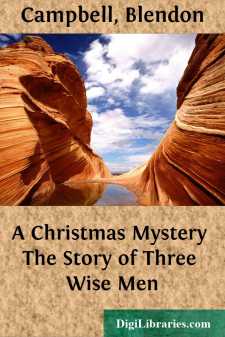 Three men who had gained great fame and honour throughout the world met unexpectedly in front of the bookstall at Paddington Station. Like most of the great ones of the earth they were personally acquainted, and they exchanged surprised greetings.

Sir Angus McCurdie, the eminent physicist, scowled at the two others beneath his heavy black eyebrows.

"I'm going to a God-forsaken place in Cornwall called Trehenna," said he.

"That's odd; so am I," croaked Professor Biggleswade. He was a little, untidy man with round spectacles, a fringe of greyish beard and a weak, rasping voice, and he knew more of Assyriology than any man, living or dead. A flippant pupil once remarked that the Professor's face was furnished with a Babylonic cuneiform in lieu of features.

"How curious! I am going to the Deverills, too," said the third man.

This man was the Right Honourable Viscount Doyne, the renowned Empire Builder and Administrator, around whose solitary and remote life popular imagination had woven many legends. He looked at the world through tired grey eyes, and the heavy, drooping, blonde moustache seemed tired, too, and had dragged down the tired face into deep furrows. He was smoking a long black cigar.

"I suppose we may as well travel down together," said Sir Angus, not very cordially.

Lord Doyne said courteously: "I have a reserved carriage. The railway company is always good enough to place one at my disposal. It would give me great pleasure if you would share it."

The invitation was accepted, and the three men crossed the busy, crowded platform to take their seats in the great express train. A porter, laden with an incredible load of paraphernalia, trying to make his way through the press, happened to jostle Sir Angus McCurdie. He rubbed his shoulder fretfully.

"Why the whole land should be turned into a bear garden on account of this exploded superstition of Christmas is one of the anomalies of modern civilization. Look at this insensate welter of fools travelling in wild herds to disgusting places merely because it's Christmas!"

"You seem to be travelling yourself, McCurdie," said Lord Doyne.

"Yes--and why the devil I'm doing it, I've not the faintest notion," replied Sir Angus.

"It's going to be a beast of a journey," he remarked some moments later, as the train carried them slowly out of the station. "The whole country is under snow--and as far as I can understand we have to change twice and wind up with a twenty-mile motor drive."

He was an iron-faced, beetle-browed, stern man, and this morning he did not seem to be in the best of tempers. Finding his companions inclined to be sympathetic, he continued his lamentation.

"And merely because it's Christmas I've had to shut up my laboratory and give my young fools a holiday--just when I was in the midst of a most important series of experiments."

Professor Biggleswade, who had heard vaguely of and rather looked down upon such new-fangled toys as radium and thorium and helium and argon--for the latest astonishing developments in the theory of radio-activity had brought Sir Angus McCurdie his world-wide fame--said somewhat ironically:

"If the experiments were so important, why didn't you lock yourself up with your test tubes and electric batteries and finish them alone?"

"Man!" said McCurdie, bending across the carriage, and speaking with a curious intensity of voice, "d'ye know I'd give a hundred pounds to be able to answer that question?"

"What do you mean?" asked the Professor, startled....