A Christmas Child A Sketch of a Boy-Life 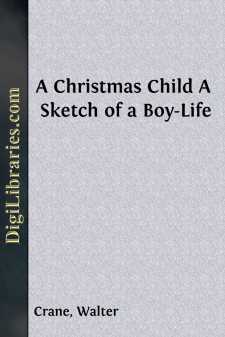 BABY TED. "Where did you get those eyes so blue?" "Out of the sky as I came through."

Christmas week a good many years ago. Not an "old-fashioned" Christmas this year, for there was no snow or ice; the sky was clear and the air pure, but yet without the sharp, bracing clearness and purity that Master Jack Frost brings when he comes to see us in one of his nice, bright, sunny humours. For he has humours as well as other people—not only is he fickle in the extreme, but even black sometimes, and he is then, I can assure you, a most disagreeable visitor. But this Christmas time he had taken it into his head not to come at all, and the world looked rather reproachful and disconcerted. The poor, bare December world—it misses its snow garment, so graciously hiding all imperfections revealed by the absence of green grass and fluttering leaves; it misses, too, its winter jewels of icicles and hoar frost. Poor old world! What a great many Decembers you have jogged through; no wonder you begin to feel that you need a little dressing up and adorning, like a beauty no longer as young as she has been. Yet ever-young world, too! Who, that gazes at March's daffodils and sweet April's primroses, can believe that the world is growing old? Sometimes one could almost wish that it would leave off being so exquisitely, so heartlessly young. For the daffodils nod their golden heads, the primroses smile up through their leafy nests—year after year, they never fail us. But the children that loved them so; the little feet that trotted so eagerly down the lanes, the tiny hands that gathered the flower-treasures with such delight—where are they all? Men and women, some in far-off lands, perhaps; or too wearied by cares and sorrows to look for the spring flowers of long ago. And some—the sweetest of all, these seem—farther away still, and yet surely nearer? in the happier land, whose flowers our fancy tries in vain to picture.

But I am forgetting a little, I think, that I am going to tell about a child to children, and that my "tellings" begin, not in March or April, but at Christmas-time. Christmas-time, fortunately, does not depend on Jack Frost for all its pleasures. Christmas-boxes are just as welcome without as with his presence. And never was a Christmas-box more welcome than one that came to a certain house by the sea one twenty-sixth of December, now a good many years ago.

Yet it was not a very big present, nor a very uncommon present. But it was very precious, and, to my thinking, very, very pretty; for it was a wee baby boy. Such a dear wee baby, I think you would have called it; so neat and tiny, and with such nice baby-blue eyes. Its hands and feet, especially, were very delightful. "Almost as pretty as newly-hatched ducklings, aren't they?" a little girl I know once said of some baby feet that she was admiring, and I really think she was right. No wonder was it, that the happy people in the house by the sea were very proud of their Christmas-box, that the baby's mother, especially, thought there never was, never could be, anything so sweet as her baby Ted....