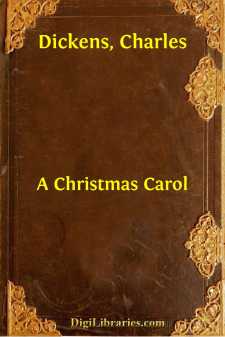 The combined qualities of the realist and the idealist which Dickens possessed to a remarkable degree, together with his naturally jovial attitude toward life in general, seem to have given him a remarkably happy feeling toward Christmas, though the privations and hardships of his boyhood could have allowed him but little real experience with this day of days.

Dickens gave his first formal expression to his Christmas thoughts in his series of small books, the first of which was the famous "Christmas Carol," the one perfect chrysolite. The success of the book was immediate. Thackeray wrote of it: "Who can listen to objections regarding such a book as this? It seems to me a national benefit, and to every man or woman who reads it, a personal kindness."

This volume was put forth in a very attractive manner, with illustrations by John Leech, who was the first artist to make these characters live, and his drawings were varied and spirited.

There followed upon this four others: "The Chimes," "The Cricket on the Hearth," "The Battle of Life," and "The Haunted Man," with illustrations on their first appearance by Doyle, Maclise, and others. The five are known to-day as the "Christmas Books." Of them all the "Carol" is the best known and loved, and "The Cricket on the Hearth," although third in the series, is perhaps next in point of popularity, and is especially familiar to Americans through Joseph Jefferson's characterisation of Caleb Plummer.

Dickens seems to have put his whole self into these glowing little stories. Whoever sees but a clever ghost story in the "Christmas Carol" misses its chief charm and lesson, for there is a different meaning in the movements of Scrooge and his attendant spirits. A new life is brought to Scrooge when he, "running to his window, opened it and put out his head. No fog, no mist; clear, bright, jovial, stirring cold; cold, piping for the blood to dance to; Golden sun-light; Heavenly sky; sweet fresh air; merry bells. Oh, glorious! Glorious!" All this brightness has its attendant shadow, and deep from the childish heart comes that true note of pathos, the ever memorable toast of Tiny Tim, "God bless Us, Every One!" "The Cricket on the Hearth" strikes a different note. Charmingly, poetically, the sweet chirping of the little cricket is associated with human feelings and actions, and at the crisis of the story decides the fate and fortune of the carrier and his wife.

Dickens's greatest gift was characterization, and no English writer, save Shakespeare, has drawn so many and so varied characters. It would be as absurd to interpret all of these as caricatures as to deny Dickens his great and varied powers of creation. Dickens exaggerated many of his comic and satirical characters, as was his right, for caricature and satire are very closely related, while exaggeration is the very essence of comedy. But there remains a host of characters marked by humour and pathos. Yet the pictorial presentation of Dickens's characters has ever tended toward the grotesque....