A Child's History of England 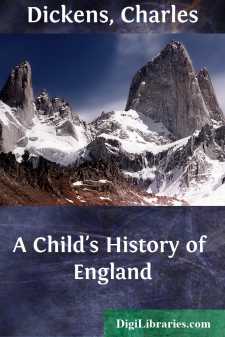 CHAPTER I—ANCIENT ENGLAND AND THE ROMANS

If you look at a Map of the World, you will see, in the left-hand upper corner of the Eastern Hemisphere, two Islands lying in the sea.  They are England and Scotland, and Ireland.  England and Scotland form the greater part of these Islands.  Ireland is the next in size.  The little neighbouring islands, which are so small upon the Map as to be mere dots, are chiefly little bits of Scotland,—broken off, I dare say, in the course of a great length of time, by the power of the restless water.

In the old days, a long, long while ago, before Our Saviour was born on earth and lay asleep in a manger, these Islands were in the same place, and the stormy sea roared round them, just as it roars now.  But the sea was not alive, then, with great ships and brave sailors, sailing to and from all parts of the world.  It was very lonely.  The Islands lay solitary, in the great expanse of water.  The foaming waves dashed against their cliffs, and the bleak winds blew over their forests; but the winds and waves brought no adventurers to land upon the Islands, and the savage Islanders knew nothing of the rest of the world, and the rest of the world knew nothing of them.

It is supposed that the Phœnicians, who were an ancient people, famous for carrying on trade, came in ships to these Islands, and found that they produced tin and lead; both very useful things, as you know, and both produced to this very hour upon the sea-coast. The most celebrated tin mines in Cornwall are, still, close to the sea.  One of them, which I have seen, is so close to it that it is hollowed out underneath the ocean; and the miners say, that in stormy weather, when they are at work down in that deep place, they can hear the noise of the waves thundering above their heads.  So, the Phœnicians, coasting about the Islands, would come, without much difficulty, to where the tin and lead were.

The Phœnicians traded with the Islanders for these metals, and gave the Islanders some other useful things in exchange.  The Islanders were, at first, poor savages, going almost naked, or only dressed in the rough skins of beasts, and staining their bodies, as other savages do, with coloured earths and the juices of plants.  But the Phœnicians, sailing over to the opposite coasts of France and Belgium, and saying to the people there, ‘We have been to those white cliffs across the water, which you can see in fine weather, and from that country, which is called Britain, we bring this tin and lead,’ tempted some of the French and Belgians to come over also.  These people settled themselves on the south coast of England, which is now called Kent; and, although they were a rough people too, they taught the savage Britons some useful arts, and improved that part of the Islands.  It is probable that other people came over from Spain to Ireland, and settled there.

Thus, by little and little, strangers became mixed with the Islanders, and the savage Britons grew into a wild, bold people; almost savage, still, especially in the interior of the country away from the sea where the foreign settlers seldom went; but hardy, brave, and strong....