A Child's Book of Saints 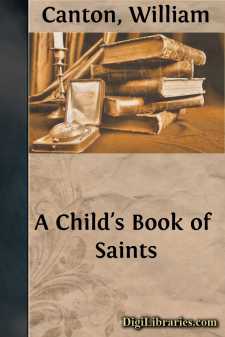 In the Forest of Stone

Looking down the vista of trees and houses from the slope of our garden, W. V. saw the roof and spire of the church of the Oak-men showing well above the green huddle of the Forest.

"It is a pretty big church, isn't it, father?" she asked, as she pointed it out to me.

It was a most picturesque old-fashioned church, though in my thoughtlessness I had mistaken it for a beech and a tall poplar growing apparently side by side; but the moment she spoke I perceived my illusion.

"I expect, if we were anywhere about on a Sunday morning," she surmised, with a laugh, "we should see hundreds and hundreds of Oak-girls and Oak-boys going in schools to service."

"Dressed in green silk, with bronze boots and pink feathers—the colours of the new oak-leaves, eh?"

"Oh, father, it would be lovely!" in a burst of ecstasy. "Oughtn't we to go and find the way to their church?"

We might do something much less amusing. Accordingly we took the bearings of the green spire with the skill of veteran explorers. It lay due north, so that if we travelled by the way of the North Star we should be certain to find it. Wheeling the Man before us, we made a North Star track for ourselves through the underwood and over last year's rustling beech-leaves, till Guy ceased babbling and crooning, and dropped into a slumber, as he soon does in the fresh of the morning. Then we had to go slowly for fear he should be wakened by the noise of the dead wood underfoot, for, as we passed over it with wheels and boots, it snapped and crackled like a freshly-kindled fire. It was a relief to get at last to the soft matting of brown needles and cones under the Needle-trees, for there we could go pretty quickly without either jolting him or making a racket.

We went as far as we were able that day, and we searched in glade and lawn, in coppice and dingle, but never a trace could we find of the sylvan minster where the Oak-people worship. As we wandered through the Forest we came upon a number of notice boards nailed high up on the trunks of various trees, but when W. V. discovered that these only repeated the same stern legend: "Caution. Persons breaking, climbing upon, or otherwise damaging," she indignantly resented this incessant intrusion on the innocent enjoyment of free foresters. How much nicer it would have been if there had been a hand on one of these repressive boards, with the inscription: "This way to the North Star Church;" or, if a caution was really necessary for some of the people who entered the Forest, to say: "The public are requested not to disturb the Elves, Birch-ladies, and Oak-men;" but of course the most delightful thing would be to have a different fairy-tale written up in clear letters on each of the boards, and a seat close by where one could rest and read it comfortably.

I told her there were several forests I had explored, in which something like that was really done; only the stories were not fairy-tales, but legends of holy men and women; and among the branches of the trees were fixed most beautifully coloured glass pictures of those holy people, who had all lived and died, and some of whom had been buried, in those forests, hundreds of years ago....