A Catechism of the Steam Engine 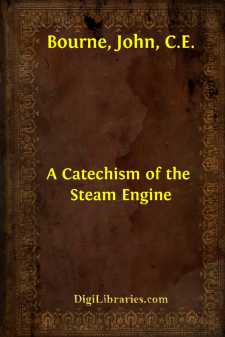 MECHANICAL PRINCIPLES OF THE STEAM ENGINE. CLASSIFICATION OF ENGINES.

A.--A vacuum means an empty space; a space in which there is neither water nor air, nor anything else that we know of.

2. Q.--Wherein does a high pressure differ from a low pressure engine?

3. Q.--In what way would you class the various kinds of condensing engines?

A.--Into single acting, rotative, and rotatory engines. Single acting engines are engines without a crank, such as are used for pumping water. Rotative engines are engines provided with a crank, by means of which a rotative motion is produced; and in this important class stand marine and mill engines, and all engines, indeed, in which the rectilinear motion of the piston is changed into a circular motion. In rotatory engines the steam acts at once in the production of circular motion, either upon a revolving piston or otherwise, but without the use of any intermediate mechanism, such as the crank, for deriving a circular from a rectilinear motion. Rotatory engines have not hitherto been very successful, so that only the single acting or pumping engine, and the double acting or rotative engine can be said to be in actual use. For some purposes, such, for example, as forcing air into furnaces for smelting iron, double acting engines are employed, which are nevertheless unfurnished with a crank; but engines of this kind are not sufficiently numerous to justify their classification as a distinct species, and, in general, those engines may be considered to be single acting, by which no rotatory motion is imparted.

4. Q.--Is not the circular motion derived from a cylinder engine very irregular, in consequence of the unequal leverage of the crank at the different parts of its revolution?

A.--No; rotative engines are generally provided with a fly-wheel to correct such irregularities by its momentum; but where two engines with their respective cranks set at right angles are employed, the irregularity of one engine corrects that of the other with sufficient exactitude for many purposes. In the case of marine and locomotive engines, a fly-wheel is not employed; but for cotton spinning, and other purposes requiring great regularity of motion, its use with common engines is indispensable, though it is not impossible to supersede the necessity by new contrivances....