A Candid Examination of Theism 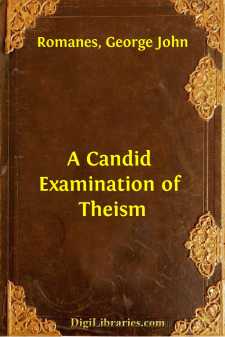 The following essay was written several years ago; but I have hitherto refrained from publishing it, lest, after having done so, I should find that more mature thought had modified the conclusions which the essay sets forth. Judging, however, that it is now more than ever improbable that I shall myself be able to detect any errors in my reasoning, I feel that it is time to present the latter to the contemplation of other minds; and in doing so, I make this explanation only because I feel it desirable to state at the outset that the present treatise was written before the publication of Mr. Mill's treatise on the same subject. It is desirable to make this statement, first, because in several instances the trains of reasoning in the two essays are parallel, and next, because in other instances I have quoted passages from Mr. Mill's essay in connections which would be scarcely intelligible were it not understood that these passages are insertions made after the present essay had been completed. I have also added several supplementary essays which have been written since the main essay was finished.

It is desirable further to observe, that the only reason why I publish this edition anonymously is because I feel very strongly that, in matters of the kind with which the present essay deals, opinions and arguments should be allowed to produce the exact degree of influence to which as opinions and arguments they are entitled: they should be permitted to stand upon their own intrinsic merits alone, and quite beyond the shadow of that unfair prejudication which cannot but arise so soon as their author's authority, or absence of authority, becomes known. Notwithstanding this avowal, however, I fear that many who glance over the following pages will read in the "Physicus" of the first one a very different motive. There is at the present time a wonderfully wide-spread sentiment pervading all classes of society—a sentiment which it would not be easy to define, but the practical outcome of which is, that to discuss the question of which this essay treats is, in some way or other, morally wrong. Many, therefore, who share this sentiment will doubtless attribute my reticence to a puerile fear on my part to meet it. I can only say that such is not the case. Although I allude to this sentiment with all respect—believing as I do that it is an offshoot from the stock which contains all that is best and greatest in human nature—nevertheless it seems to me impossible to deny that the sentiment in question is as unreasonable as the frame of mind which harbours it must be unreasoning. If there is no God, where can be the harm in our examining the spurious evidence of his existence? If there is a God, surely our first duty towards him must be to exert to our utmost, in our attempts to find him, the most noble faculty with which he has endowed us—as carefully to investigate the evidence which he has seen fit to furnish of his own existence as we investigate the evidence of inferior things in his dependent creation....