A Canadian Manor and Its Seigneurs The Story of a Hundred Years, 1761-1861 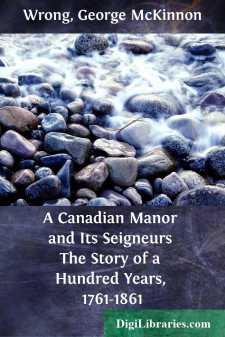 If one is not in too great a hurry it is wise to take the steamer—not the train—at Quebec and travel by it the eighty miles down the St. Lawrence to Malbaie, or Murray Bay, as the English call it, somewhat arrogantly rejecting the old French name used since the pioneer days of Champlain. This means an early morning start and six or seven hours—the steamers are not swift—on that great river. Only less than a mile apart are its rugged banks at Quebec but, even then, they seem to contract the mighty torrent of water flowing between them. Once past Quebec the river broadens into a great basin, across which we see the head of the beautiful Island of Orleans. We skirt, on the south side, the twenty miles of the island's well wooded shore, dotted with the cottages of the habitants, stretched irregularly along the winding road. Church spires rise at intervals; the people are Catholic to a man. Once past this island we begin to note changes. Hardly any longer is the St. Lawrence a river; rather is it now an inlet of the sea; the water has become salt; the air is fresher. So wide apart are the river's shores that the cottages far away to the south seem only white specks.

Hugging the north shore closely we draw in under towering Cap Tourmente, fir-clad, rising nearly two thousand feet above us; a mighty obstacle it has always been to communication by land on this side of the river. Soon comes a great cleft in the mountains, and before us is Baie St. Paul, opening up a wide vista to the interior. We are getting into the Malbaie country for Isle aux Coudres, an island some six miles long, opposite Baie St. Paul, was formerly linked with Malbaie under one missionary priest. The north shore continues high and rugged. After passing Les Eboulements, a picturesque village, far above us on the mountain side, we round Cap aux Oies, in English, unromantically, Goose Cape, and, far in front, lies a great headland, sloping down to the river in bold curves. On this side of the headland we can see nestling in under the cliff what, in the distance, seems only a tiny quay. It is the wharf of Malbaie. The open water beyond it, stretching across to Cap à l'Aigle, marks the mouth of the bay. The great river, now twelve miles broad, with a surging tide, rising sometimes eighteen or twenty feet, has the strength and majesty almost of Old Ocean himself.

As we land we see nothing striking. There is just a long wharf with some cottages clustered at the foot of the cliff. But when we have ascended the short stretch of winding road that leads over the barrier of cliff we discover the real beauties of Malbaie....