A Canadian Heroine, Volume 3 A Novel 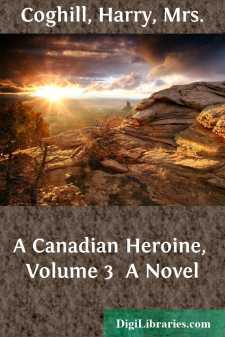 Mr. Leigh was in a very depressed and anxious mood. His late conversations with Mrs. Costello had disturbed him and broken up the current of his thoughts, and even to some extent of his usual occupations, without producing any result beneficial to either of them. She had told him a strange and almost incredible story of her life; and then, just when he was full of sympathy and eagerness to be of use to her, everything seemed suddenly to have changed, and the events that followed had been wholly, as it were, out of his reach. He thought over the matter with a little sensation, which, if he had been less simple and generous a man, might have been offence. Even as it was, he felt uncomfortably divided between his real interest in his old friends, and a temptation to pretend that he was not interested at all. He remembered, too, with a serio-comical kind of remorse, the manner in which he had spoken to Mrs. Costello about Maurice. He was obliged to confess to himself that Maurice had never said a word to him which could be taken as expressing any other than a brotherly feeling of regard for Lucia; he had certainly fancied that there was another kind of affection in his thoughts; but it was no part of the old soldier's code of honour to sanction the betrayal of a secret discovered by chance, and he felt guilty in remembering how far the warmth of his friendship had carried him. He considered, by way of tormenting himself yet further, that it was perfectly possible for a young man, being daily in the company of a beautiful and charming girl, to fancy himself in love with her, and yet, on passing into a different world and seeing other charming girls, to discover that he had been mistaken. It is true that if any other person had suggested that Maurice might have done this, Mr. Leigh would have been utterly offended and indignant; nevertheless, having proposed the idea to himself, he tried to look upon it as quite natural and justifiable. After all, this second theory of inconstancy rested upon the first theory of supposed love, and that upon guesses and surmises, so that the whole edifice was just as shadowy and unsubstantial as it could well be. But then it is curious to see how much real torment people manage to extract from visionary troubles.

While his neighbours were still at Moose Island Mr. Leigh received two letters from Maurice. The first not only did not contain the usual note enclosed for Mrs. Costello, but there was not the slightest message to, or mention of, either her or Lucia. Mr. Leigh examined the letter, peeped into the envelope, shook the sheets apart (for Maurice's writing filled much space with few words), but found nothing. The real explanation of this was simple enough. Maurice had written his note to Mrs. Costello, and then, just as he was going to put it in the envelope, was called to his grandfather. In getting up from the table he gave the note a push, which sent it down into a wastepaper basket. There it lay unnoticed, and when he came back, just in time to send off his letters, he fancied, not seeing it, that he had put it into the envelope, which accordingly he closed and sent to the post without it. But of course Mr. Leigh knew nothing about this.

The second letter was equally without enclosure or message, though from a very different cause. It was scarcely a dozen lines in length, and only said that Mr. Beresford was dying. Maurice had just received Mrs. Costello's farewell note; he was feeling angry and grieved, and could think of no better expedient than to keep silence for the moment, even if he had had time to renew his expostulations....