A Canadian Heroine, Volume 2 A Novel 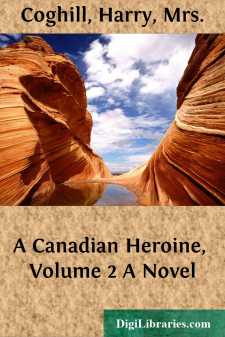 Mrs. Costello had felt it a kind of reprieve when she heard from Mr. Strafford that they might delay their journey safely for a month. The sober middle age which had come upon her before its time, as her life rolled on out of the anguish and tumult of the past, made home and quietness the most desirable things on earth to her, and her health and spirits, neither yet absolutely broken, but both strained almost to the extent of their endurance, unfitted her for the changes and excitements of long travel. So she clung to the idea of delay with an unacknowledged hope that some cause might deliver them from their present terrors, and yet suffer them to remain at Cacouna.

In the meantime all went on outwardly as usual. The duties and courtesies of every-day life had to be kept up,—the more carefully because it was not desirable to attract attention. Besides, Mrs. Costello felt that an even flow of occupation was the best thing for Lucia, whom she watched, with the keenest and tenderest solicitude, passing through the shadow of that darkness which she herself knew so well. Doctor Morton brought his wife home most opportunely for her wishes. A variety of such small dissipations as Cacouna could produce, naturally celebrated the event; and Lucia as principal bridesmaid at the wedding could not, if she would, have shut herself out from them. She had, indeed, dreaded the first meeting with Bella, but it passed off without embarrassment. To all appearance Mrs. Morton had lost either the sharpness of observation or the readiness of tongue that had formerly belonged to her, for the change which Lucia felt in herself was allowed to remain unremarked.

Mrs. Bellairs had long ago got over her displeasure with Lucia. She had watched her narrowly at the time of Percy's leaving, and became satisfied that there was some trouble of a sterner kind than regret for him now weighing heavily upon her heart.

Although Mrs. Bellairs told her sister of the intended journey of Mrs. Costello and Lucia, the preparations for that journey were being made with as little stir as possible, and except herself, her husband, and Mr. Leigh, few persons dreamed of such an improbable event. Bella even received a hint to speak of it to no one but her husband, for Mrs. Costello was anxious to avoid gossip, and had taken much thought how to attain the juste milieu between secrecy and publicity. In the meantime there was much to be done in prospect of a long, an indefinitely long, absence, and the needful exertion both of mind and body was good for Lucia. Under no circumstances, perhaps, could she have sat quietly down to bewail her misfortunes, or have allowed herself to sink under them, but, as it was, there was no temptation to indolent indulgence of any kind. Bitter hours came still—came especially with the silence and darkness of night, when her thoughts would go back to the sweet days of the past summer and linger over them, till some word, or look, or trifling incident coming to her memory more distinctly, would bring with it the sudden recollection of the barren, dreary present,—of the irreparable loss.

In all her thoughts of Percy there was comfort. He had loved her honestly and sincerely, and if his nature was really lower than her own, she was not likely to guess it. She had acted, in dismissing him, on a kind of distrust, she would have said, of human nature; more truly, of him; but even this distrust was so vague and so disguised that it never shadowed his character in her eyes. So, though she had parted from him, she took comfort in the thought of his love, and kept it in her heart to save herself from the overwhelming sense of degradation, which took possession of her in remembering why she had sent him away from her....