A Canadian Heroine, Volume 1 A Novel 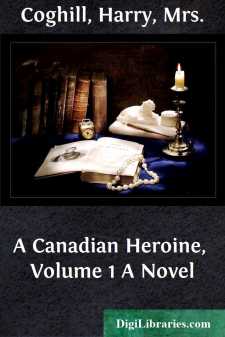 It was near sunset, and the season was early summer. Every tree was in full leaf, but the foliage had still the exquisite freshness of its first tints, undimmed by dust or scorching heat. The grass was, for the present, as green as English grass, but the sky overhead was more glorious than any that ever bent above an English landscape. So far away it rose overhead, where colour faded into infinite space, that the eye seemed to look up and up, towards the Gate of Heaven, and only through mortal weakness to fail in reaching it. Low down around the horizon there was no blue, but pure, pale green depths, where clouds floated, magnificent in deep rosy and golden splendour. Under such skies the roughest landscape, the wildest forest, softens into beauty; such light and colour, like fairy robes, glorify the most commonplace; but here, earth lent her own charms to be decked by heaven.

Through a quiet landscape went the river—the grand silent flood which by-and-by, many miles further on its course, would make Niagara. Here it flowed calmly, reflecting the sunset, a giant with its energies untaxed and its passions unroused—a kindly St. Christopher, yet capable of being transformed into a destroying Thor. Far away, seen over a low projecting point of land, white sails gleamed now and then, as ships moved upon the lake from whence the river came; and nearer, upon the great stream itself, a few boats were idling. In the bend formed by the point, and quite near the lake, lay a small town, its wooden wharves and warehouses lining the shore for some distance. Lower down, the bank rose high, dropping precipitously to the water's edge; and nearer still, the precipice changed to a steep, but green and wooded bank, and here, on the summit of the bank, stood Mrs. Costello's cottage.

It was a charming white nest, with a broad verandah all embowered in green, so placed as to look out upon the river through a screen of boughs and flowers. If you had seen Mrs. Costello and her daughter sitting upon the verandah, as they were tolerably sure to be found every day while summer lasted, you would have owned that it would be hard to find a prettier picture set in a prettier frame.

This evening they were there alone. Mrs. Costello had her work-table placed at the end nearest the river, and her rocking-chair beside it. Some knitting was in her hands, but she could not knit, for her ball of wool was being idly wound and unwound round her daughter's fingers.

Sitting on a footstool, leaning back against her mother's knee, was this daughter—a child loved (it could almost be seen at a glance) with an absorbing, passionate love. A girl of seventeen, just between child and woman, who seemed to have been a baby but yesterday, and who still, in the midst of her new womanly grace, kept her caressing baby ways. Something unusual, not only in degree but in kind, belonged to her brilliant beauty, and set it off. The marvellous blackness of hair and eyes was so soft in its depth, the tint of her skin so transparent in its duskiness, her slight figure so flexible, so exquisite in its outlines, that it was impossible not to wonder what the type was which produced so perfect an example. Spanish it was said to be, but the child was Canadian by birth, and her mother English; it was clear that whatever race had bestowed Lucia's dower of beauty, it had come to her through her father.

Mother and daughter often sat as now, silent and idle both; Lucia dreaming after her girlish fashion, and Mrs. Costello content to wait and let her life be absorbed in her child's. But to-night Lucia was dreaming of England, the far-away "home" which she had never seen, but of which almost all her elder friends spoke, and where her mother's childhood and girlhood had been passed....