A Campfire Girl's Test of Friendship 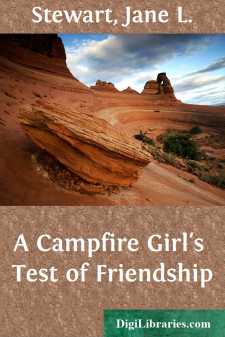 “Oh, what a glorious day!” cried Bessie King, the first of the members of the Manasquan Camp Fire Girls of America to emerge from the sleeping house of Camp Sunset, on Lake Dean, and to see the sun sparkling on the water of the lake. She was not long alone in her enjoyment of the scene, however.

“Oh, it’s lovely!” said Dolly Ransom, as, rubbing her eyes sleepily, since it was only a little after six, she joined her friend on the porch. “This is really the first time we’ve had a chance to see what the lake looks like. It’s been covered with that dense smoke ever since we’ve been here.”

“Well, the smoke has nearly all gone, Dolly. The change in the wind not only helped to put out the fire, but it’s driving the smoke away from us.”

“The smoke isn’t all gone, though, Bessie. Look over there. It’s still rising from the other end of the woods on the other side of the lake, but it isn’t bothering us over here any more.”

“What a pity it is that we’ve got to go away just as the weather gives us a chance to enjoy it here! But then I guess we’ll have a good time when we do go away, anyhow. We thought we weren’t going to enjoy it here, but it hasn’t been so bad, after all, has it?”

“No, because it ended well, Bessie. But if those girls in the camp next door had had their way, we wouldn’t have had a single pleasant thing to remember about staying here, would we?”

“They’ve had their lesson, I think, Dolly. Perhaps they won’t be so ready to look down on the Camp Fire Girls after this—and I’m sure they would be nice and friendly if we stayed.”

“I wouldn’t want any of their friendliness. All I’d ask would be for them to let us alone. That’s all I ever did want them to do, anyhow. If they had just minded their own affairs, there wouldn’t have been any trouble.”

“Well, I feel sort of sorry for them, Dolly. When they finally got into real trouble they had to come to us for help, and if they are the sort of girls they seem to be, they couldn’t have liked doing that very well.”

“You bet they didn’t, Bessie! It was just the hardest thing they could have done. You see, the reason they were so mean to us is that they are awfully proud, and they think they’re better than any other people.”

“Then what’s the use of still being angry at them? I thought you weren’t last night—not at Gladys Cooper, at least.”

“Why, I thought then that she was in danger because of what I’d done, and that made me feel bad. But you and I helped to get her back to their camp safely, so I feel as if we were square. I suppose I ought to be willing to forgive them for the way they acted, but I just can’t seem to do it, Bessie.”

“Well, as long as we’re going away from here to-day anyhow, it doesn’t make much difference. We’re not likely to see them again, are we?”

“I don’t know why not—those who live in the same town, anyhow. Marcia Bates and Gladys Cooper—the two who were lost on the mountain last night, you know—live very close to me at home.”

“You were always good friends with Gladys until you met her up here, weren’t you?”