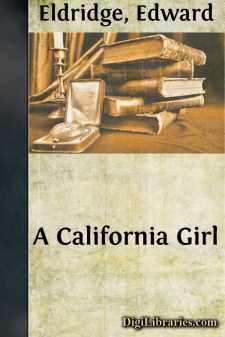 "Well, dear," said Mrs. Lawton to her daughter Clara, "the home you will enter to-morrow as a bride is very different from the home that I entered as your father's bride. Our home was a log cabin in the Michigan woods, with only an acre of clearing, where the growing season is only about four months long and the winter eight. Snow lay on the ground six months of the year, from one to three feet deep. In our cabin, we had the bare necessaries and your father had to work very hard cutting cord-wood for a living; but we were very happy, for we had love and health; and need I say, dear, what a joy it was to us when you entered our cabin as a passenger on the journey of life.

"My wish for you now is, that you may find as much happiness in the companionship of Charles Herne as I have had in your father's, and as much joy in the advent of a little one in your home as I did in you."

"You have always been one of the kindest and best mothers a girl ever had," said Clara, warmly.

"I have tried to be," said Mrs. Lawton, simply.

Clara Lawton was twenty-two years of age, prepossessing in appearance, with a bright, happy expression. Her nature was deep and affectionate, her tastes domestic and social. When she was twenty, Mr. and Mrs. Lawton had moved to California and settled in the pretty little city of Roseland, which nestled in the foothills of the Sierra Nevadas.

At a camping party Clara had first met Charles Herne, and the outcome of that meeting was that to-morrow would be Clara's wedding day.

All her life she had been taught to consider this the most important event of her life, the acme of happiness, the end and aim of her womanhood. The thought of her own little world and the decrees of the great world at large alike hold her to that belief. That she is a soul in process of development; that marriage is only one step towards something higher; that the true union is the joining of hands to work for humanity, are doctrines which would sound strange in her ears. She feels that great change that is coming into her life, and her thoughts are in accordance with her character and circumstances. One bride may be filled with the sadness of unwilling acquiescence, another with the joy of complete absorption, a third with the excitement incident upon an entire change of environment. Clara Lawton's sweet nature prompted only tender thoughts of the parents she was leaving, strong love for the man who was to be her husband and the desire to be a true wife and make their union a happy one.

The road going north from the beautiful little city of Roseland to the mountains is known as the Walnut road. Six miles from Roseland, on the Walnut road, is "Treelawn," the home of Charles Herne. A modern two-story house is built well back from the road, and between the house and road are lawns decorated with flower-beds, some tall oleanders, several banana plants, and choice varieties of roses, vines, and shrubbery. On one side of the house there is a thriving orange and lemon orchard; on the other fig, almond, and walnut trees; while back of the house are other extensive orchards of the finest fruits. The house is very comfortably furnished, much better than most houses in the country; its arrangement being very convenient and modern.

Charles Herne, the owner of this property was, at the time our story opens, a young man of twenty-eight, tall, well built, with a pleasant open countenance which was a true index of his character. He always looked closely after his business interests, but at the same time allowed his generous, kindly spirit full scope.

When Charles was eighteen his father thought it would be well for him to go out to work a year or so on other ranches, that he might gain more by experience, get more ideas and know what it was to depend on himself and make his own way in the world. After an absence of two years, came the welcome summons home. On the evening of his return, when Charles and Mr. Herne were seated comfortably on the porch, the father said:

"Well, Charles, relate some of your experiences while working on different ranches."

"Though I did not speak of it in my letters, father," said Charles, "I have had a pretty tough time of it since I left home."

"I thought so," said his father, "and I wish you had written particulars."

"I should have done so," replied Charles, "but I wanted to see if there was any sand in me and what staying qualities I possessed....