A Burial Cave in Baja California The Palmer Collection, 1887 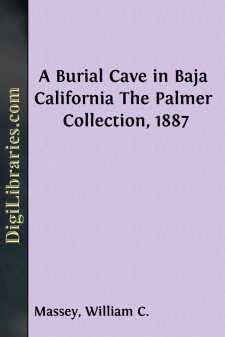 In December of 1887 Dr. Edward Palmer, the naturalist, set sail from the port of Guaymas in Sonora, crossed the Gulf of California, and landed at BahÃ­a de Los Angeles on the peninsula of Baja California. Then, as now, there was a modest gold-mining operation at the bay. During his brief stay at the mining station, Dr. Palmer excavated a small natural cave which had been used by the Indians who were then extinct in that part of the peninsula.

Seven partially disturbed skeletons and a variety of associated artifacts were collected and deposited at the United States National Museum. The collection also included some potsherds and shells from a midden on the shores of the bay. All of these items were listed and briefly described in the Annual Report of the United States National Museum for the year 1888 (pp. 127-129).

Aside from the intrinsic value of presenting archaeological material from the little-known area of Baja California, the Palmer Collection has particular importance because of its immediate geographic source. BahÃ­a de Los Angeles lies in that part of Baja California most accessible to the Mexican mainland (). Not only is there a relative physical closeness, but the Gulf islands form here a series of “stepping stones” from BahÃ­a de Los Angeles across to Tiburon Island, home of the Seri, and thence to the adjacent mainland coast of Sonora.

The bay lies in the north-central desert region of the peninsula, where the environment is especially difficult because of extreme aridity, scarcity of surface water, and the consequent dearth of plant and animal life.

In view of these conditions, it has been suggested that the Seri may be descendants of people who, hard-pressed by the environmental poverty of this section of Baja California, may have moved across the Gulf to Tiburon Island and Sonora (Kroeber, 1931, pp. 5, 49-50). This hypothesis has appealed to one California archaeologist, although at present there is insufficient evidence from archaeology or ethnography either to support or to deny it (Rogers, 1945, p. 194). However, the archaeological collection from BahÃ­a de Los Angeles does indicate trade and some contact across the Gulf.

In this paper emphasis is placed on the evaluation of the Palmer Collection with respect to the known archaeology and ethnography of Baja California.

The Indians who inhabited the area surrounding BahÃ­a de Los Angeles spoke the Borjeño language of the Peninsular Yuman group, of the Yuman Family of languages (). They were linguistically and historically related to other Yuman-speaking groups of the peninsula and areas to the north (Massey, 1949, p. 292). At the time of European contact these people—like all other aboriginal groups on the peninsula—were hunters, fishers, and gatherers. The nearest agricultural tribes were on the lower Colorado River.

Culturally, the Borjeño were like other Peninsular Yumans of relatively late prehistoric and historic periods in central Baja California....