A Bunch of Cherries A Story of Cherry Court School 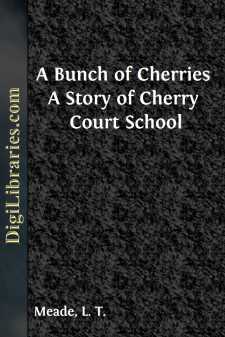 The house was long and low and rambling. In parts at least it must have been quite a hundred years old, and even the modern portion was not built according to the ideas of the present day, for in 1870 people were not so aesthetic as they are now, and the lines of beauty and grace were not considered all essential to happiness.

So even the new part of the house had square rooms destitute of ornament, and the papers were small in pattern and without any artistic designs, and the windows were square and straight, and the ceilings were somewhat low.

The house opened on to a wide lawn, and at the left of the lawn was a paddock and at the right a shrubbery, and the shrubbery led away under its overhanging trees into the most perfect walled-in garden that was ever seen. The garden was two or three hundred years old. The oldest inhabitants of the place had never known the time when Cherry Court garden was not the talk of the country. Visitors came from all parts round to see it. It was celebrated on account of its very high walls built of red brick, its size, for it covered at least three acres of ground, and its magnificent cherries. The cherry trees in the Court garden bore the most splendid fruit which could be obtained in any part of the county. They were in great demand, not only for the girls who lived in the old house and played in the garden, but for the neighbors all over the country. A big price was always paid for these cherries, for they made such splendid jam, as well as being so full of juice and so ripe and good to eat that their like could not be found anywhere else.

The cherries were of all sorts and kinds, from the celebrated White Heart to the black cherry. There were cherries for cooking and cherries for eating, and in the season the trees, which were laden with ripe fruit, were a sight to behold.

In the height of the cherry season Mrs. Clavering always gave a cherry feast. It was the event of the entire year, and the girls looked forward to it, making all their arrangements in connection with it, counting the hours until it arrived, and looking upon it as the great feature of their school year. Everything turned on whether the cherries were good and the weather fine. There was no greater stimulus to hard work than the merest mention of this golden day, which came as a rule towards the end of June and just before the summer vacation. For Cherry Court School was old-fashioned according to our modern ideas, and one of its old-fashioned plans was to give holidays at the end of June instead of the end of July, so that the girls had the longest, finest days at home, and came back to work at the end of August refreshed and strengthened, and prepared for a good long tug at lessons of all sorts until Christmas.

The school consisted of twenty girls, never more and never less, for Mrs. Clavering was too great a favorite and had too wise and excellent ideas with regard to education ever to be without pupils, and never more, for she believed twenty to be the perfect number to whom she could give every attention and offer every advantage....