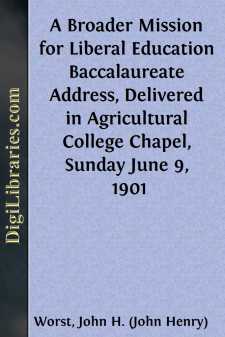 In America we recognize no aristocracy except that of genius or of character. Our countrymen are all citizens. Our government was founded upon the principle that "all men are created free and equal" and though intellectual endowments differ widely in individuals, yet special privileges are accorded to no one as a birthright. Therefore the college graduate, as well as any other aspirant, must carve his way to fame and fortune by energy and perseverance, or lose his opportunity in the tremendous activities going on about him. His only advantage is superior training which must nevertheless be pitted against practical minds in strenuous rivalry for every desirable thing he would accomplish. The mere fact of education is considered no badge of merit. Education represents power, but until it manifests itself in action, it is merely static, not dynamic, potential, not actual. It conveys to its recipient no self-acting machinery which, without lubricant or engineer will reel off success or impress mankind, as a matter of course.

The question is no longer asked by practical men "what does a man know" but "what can he do?" Knowing and doing have thus become so intimately associated by common consent as to be inseparable; for knowing without doing is indolence and doing without knowing is waste of energy. The former is sinful, the latter wasteful. For many years progressive educators have been striving against the culture-alone theory and advocating the education of the whole man—hand as well as head, body as well as mind. As a result the ancient educational structure is pretty well broken down, and the erstwhile curriculum has become a reminiscence. Many wealthy parents still educate their children for the larger pleasure which they believe education of the old type will afford them in life, but parents generally have come to look upon life as a period of intense activity rather than a brief round of pleasure, and hence provide an education for their children that will fit them for the every day demands that duty or necessity may make upon them. Since it is a matter of common observation that wealth is easily dissipated, especially when inherited, farseeing parents prefer an education for their children that is adapted to some useful end rather than the education that is largely ornamental or fashionable.

The vicissitudes of life are many. Fortune is fickle and but few young people can hope to command perpetual leisure even should their bad judgment make such a thing desirable. There can never be real independence of thought and action apart from one's conscious ability to cope with others on equal terms in any human emergency. The young man who rejoices in the provident hoardings of his ancestors which exempt him from strenuous exertion on his own part has but a small mission in life. Work is the normal condition of man. The stern necessity that compels him to labor, to think and to plan, lifts him into the pleasurable atmosphere of usefulness and imparts zeal and ambition to his energies. There can be no "excellence without great labor", and "hard work is only another name for genius."

A young man cannot begin life with a richer heritage than good health, good habits and a liberal education—an education that imparts culture to his mind and power to his body. If he should never have occasion to use his hands in some useful vocation, the training they have received will never prove burdensome. On the other hand, the fact of being in possession of reserve powers will prove a source of pleasure. It will dispel many a dark cloud and remove positive forebodings of possible want. The world is strewn with the wrecks of men who inherited fortunes before they had developed the mental poise or business experience necessary to estimate money at its true value. If they had earned their money by honest effort they would not have fallen into habits that led to unbridled extravagance and ultimate disgrace. The inheritance of unearned wealth quite frequently proves a curse rather than a blessing....