A Brief History of the United States 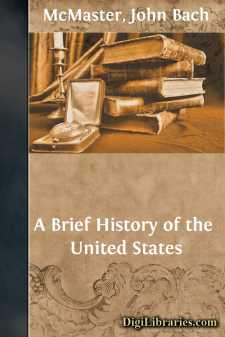 Behind him lay the gray Azores,    Behind the Gates of Hercules;  Before him not the ghost of shores,    Before him only shoreless seas.  The good mate said: "Now we must pray,    For, lo! the very stars are gone.  Brave Admiral, speak; what shall I say?"    "Why say, 'Sail on! sail on! and on!'"

They sailed and sailed, as winds might blow,    Until at last the blanched mate said:  "Why, now not even God would know    Should I and all my men fall dead.  These very winds forget their way,    For God from these dread seas is gone,  Now speak, brave Admiral; speak and say"—    He said, "Sail on! sail on! and on!"

They sailed. They sailed. Then spake the mate:    "This mad sea shows its teeth to-night.  He curls his lips, he lies in wait    With lifted teeth, as if to bite!  Brave Admiral, say but one good word;    What shall we do when hope is gone?"  The words leapt like a leaping sword:    "Sail on! sail on! sail on! and on!"

Then, pale and worn, he kept his deck,    And peered through darkness. Ah, that night  Of all dark nights! And then a speck—    A light! A light! A light! A light!  It grew, a starlit flag unfurled!    It grew to be Time's burst of dawn.  He gained a world; he gave that world    Its grandest lesson: "On! sail on!"

The New World, of which our country is the most important part, was discovered by Christopher Columbus in 1492. When that great man set sail from Spain on his voyage of discovery, he was seeking not only unknown lands, but a new way to eastern Asia. Such a new way was badly needed.

THE ROUTES OF TRADE.—Long before Columbus was born, the people of Europe had been trading with the far East. Spices, drugs, and precious stones, silks, and other articles of luxury were brought, partly by vessels and partly by camels, from India, the Spice Islands, and Cathay (China) by various routes to Constantinople and the cities in Egypt and along the eastern shore of the Mediterranean. There they were traded for the copper, tin, and lead, coral, and woolens of Europe, and then carried to Venice and Genoa, whence merchants spread them over all Europe. [1] The merchants of Genoa traded chiefly with Constantinople, and those of Venice with Egypt.

THE TURKS SEIZE THE ROUTES OF TRADE.—While this trade was at its height, Asia Minor (from the Black Sea to the Mediterranean) was conquered by the Turks, the caravan routes across that country were seized, and when Constantinople was captured (in 1453), the trade of Genoa was ruined....