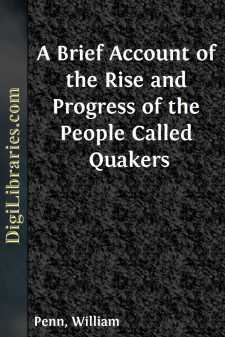 Containing a brief account of divers dispensations of God in the world, to the time he was pleased to raise this despised people, called Quakers.

Divers have been the dispensations of God since the creation of the world, unto the sons of men; but the great end of all of them, has been the renown of his own excellent name in the creation and restoration of man: man, the emblem of himself, as a God on earth, and the glory of all his works.  The world began with innocency; all was then good that the good God had made: and as he blessed the works of his hands, so their natures and harmony magnified him their Creator.  Then the morning stars sang together for joy, and all parts of his work said Amen to his law.  Not a jar in the whole frame; but man in paradise, the beasts in the field, the fowl in the air, the fish in the sea, the lights in the heavens, the fruits of the earth; yea, the air, the earth, the water, and fire, worshipped, praised, and exalted his power, wisdom, and goodness.  O holy sabbath!  O holy day to the Lord!

But this happy state lasted not long; for man, the crown and glory of the whole, being tempted to aspire above his place, unhappily yielded, against command and duty, as well as interest and felicity, and so fell below it; lost the divine image, the wisdom, power, and purity he was made in; by which, being no longer fit for paradise, he was expelled that garden of God, his proper dwelling and residence, and was driven out, as a poor vagabond, from the presence of the Lord, to wander in the earth, the habitation of beasts.

Yet God that made him had pity on him; for he, seeing man was deceived, and that it was not of malice, or an original presumption in him, but through the subtilty of the serpent, who had first fallen from his own state, and by the mediation of the woman, man’s own nature and companion, whom the serpent had first deluded, in his infinite goodness and wisdom provided a way to repair the breach, recover the loss, and restore fallen man again by a nobler and more excellent Adam, promised to be born of a woman; that as by means of a woman the evil one had prevailed upon man, by a woman also he should come into the world, who would prevail against him, and bruise his head, and deliver man from his power: and which, in a signal manner, by the dispensation of the Son of God in the flesh, in the fulness of time was personally and fully accomplished by him, and in him, as man’s Saviour and Redeemer.

But his power was not limited, in the manifestation of it to that time; for both before and since his blessed manifestation in the flesh, he has been the light and life, the rock and strength of all that ever feared God; was present with them in their temptations, followed them in their travels and afflictions, and supported and carried them through and over the difficulties that have attended them in their earthly pilgrimage.  By this, Abel’s heart excelled Cain’s, and Seth obtained the pre-eminence, and Enoch walked with God.  It was this that strove with the old world, and which they rebelled against, and which sanctified and instructed Noah to salvation.

But the outward dispensation that followed the benighted state of man, after his fall, especially among the patriarchs, was generally that of angels; as the scriptures of the Old Testament do in many places express, as to Abraham, Jacob, &c.  The next was that of the law by Moses, which was also delivered by angels, as the apostle tells us.  This dispensation was much outward, and suited to a low and servile state; called therefore, by the apostle Paul, that of a schoolmaster, which was to point out and prepare that people to look and long for the Messiah, who would deliver them from the servitude of a ceremonious and imperfect dispensation, by knowing the realities of those mysterious representations in themselves.  In this time the law was written on stone, the temple built with hands, attended with an outward priesthood, and external rites and ceremonies, that were shadows of the good things that were to come, and were only to serve till the seed came, or the more excellent and general manifestation of Christ, to whom was the promise, and to all men only in him, in whom it was yea and amen, even life from death, immortality and eternal life....