A Boy I Knew and Four Dogs 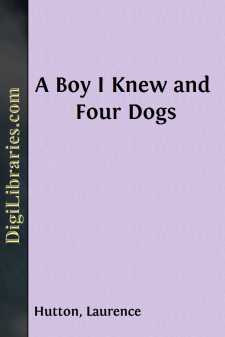 He was not a very good boy, or a very bad boy, or a very bright boy, or an unusual boy in any way. He was just a boy; and very often he forgets that he is not a boy now. Whatever there may be about The Boy that is commendable he owes to his father and to his mother; and he feels that he should not be held responsible for that.

His mother was the most generous and the most unselfish of human beings. She was always thinking of somebody else—always doing for others. To her it was blessèd to give, and it was not very pleasant to receive. When she bought anything, The Boy’s stereotyped query was, “Who is to have it?” When anything was bought for her, her own invariable remark was, “What on earth shall I do with it?” When The Boy came to her, one summer morning, she looked upon him as a gift from Heaven; and when she was told that it was a boy, and not a bad-looking or a bad-conditioned boy, her [p 4]first words were, “What on earth shall I do with it?”

She found plenty “to do with it” before she got through with it, more than forty years afterwards; and The Boy has every reason to believe that she never regretted the gift. Indeed, she once told him, late in her life, that he had never made her cry! What better benediction can a boy have than that?

The Boy’s father was a scholar, and a ripe and good one. Self-made and self-taught, he began the serious struggle of life when he was merely a boy himself; and reading, and writing, and spelling, and languages, and mathematics came to him by nature. He acquired by slow degrees a fine library, and out of it a vast amount of information. He never bought a book that he did not read, and he never read a book unless he considered it worth buying and worth keeping. Languages and mathematics were his particular delight. When he was tired he rested himself by the solving of a geometrical problem. He studied his Bible in Latin, in Greek, in Hebrew, and he had no small smattering of Sanskrit. His chief recreation, on a Sunday afternoon or on a long summer evening, was a walk with The Boy among the Hudson River docks, when the business of the day, or the week, was over and the ship was left in charge of some old quartermaster or third mate. To these sailors the father would talk in each sailor’s own tongue, whether [p 5]it were Dutch or Danish, Spanish or Swedish, Russian or Prussian, or a patois of something else, always to the great wonderment of The Boy, who to this day, after many years of foreign travel, knows little more of French than “Combien?” and little more of Italian than “Troppo caro.” Why none of these qualities of mind came to The Boy by direct descent he does not know. He only knows that he did inherit from his parent, in an intellectual way, a sense of humor, a love for books—as books—and a certain respect for the men by whom books are written.

It seemed to The Boy that his father knew everything. Any question upon any subject was sure to bring a prompt, intelligent, and intelligible answer; and, usually, an answer followed by a question, on the father’s part, which made The Boy think the matter out for himself.

The Boy was always a little bit afraid of his father, while he loved and respected him. He believed everything his father told him, because his father never fooled him but once, and that was about Santa Claus...!