A Boswell of Baghdad With Diversions 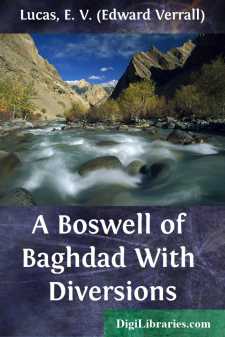 A BOSWELL OF BAGHDAD I.—Introductory

A curious and very entertaining work lies before me, or, to be more accurate, ramparts me, for it is in four ponderous volumes, capable, each, even in less powerful hands than those of the Great Lexicographer, of felling a bookseller. At these volumes I have been sipping, beelike, at odd times for some years, and I now propose to yield some of the honey—the season having become timely, since the great majority of the heroes of its thousands of pages hail from Baghdad; and Baghdad, after all its wonderful and intact Oriental past, is to-day under Britain's thumb.

The title of the book is Ibn Khallikan's Biographical Dictionary, translated from the Arabic by Bn Mac Guckin de Slane, and printed in Paris for the Oriental Translation Fund of Great Britain and Ireland, 1842-71, some centuries after it was written, for its author was dead before Edward II ascended the English throne. Who would expect Sir Sidney Lee to have had so remote an exemplar?

Remote not only in time but in distance. For although we may go to the East for religions and systems of philosophy that were old and proved worthy centuries before Hellenism or Christianity, yet we do not usually find there models for our works of reference. Hardly does Rome give us those. But there is an orderliness and thoroughness about Ibn Khallikan's methods which the Dictionary of National Biography does not exceed. The Persian may be more lenient to floridity ("No flowers, by request," was, it will be remembered, the first English editor's motto), but in his desire to leave out no one who ought to be in and to do justice to his inclusions he is beyond praise.

The modernity of the ancients is continually surprising us. It is one of the phenomena to which we are never quite inured (and could we be so we should perhaps merely substitute the antiquity of the moderns as a new source of wonder), but towards such inuring Ibn Khallikan should certainly help, since he was eminently a gossip, and in order to get human nature's fidelity to the type—no matter where found, whether æons ago or to-day, whether in savage lands or, as we say, civilized—brought home to us, it is to the gossips that we must resort: to the Pepyses and Boswells rather than to the Goethes and Platos; to the little recorders rather than the great thinkers. The small traits tell.

Ibn Khallikan's Dictionary is as interesting as it is, not because its author had any remarkable instinct as a biographer, or any gift of selection, but because if a man sets out to take account of everything, much human nature and a little excellence are bound to creep in.

I do not pretend to have dug in these volumes with any great seriousness. My object has been to extract what was odd and simple and most characteristic, in short, what was most human, and there is enough residuum for a horde of other miners. But I warn them that the dross is considerable. Ibn Khallikan's leniency to trivialities is incorrigible, and his pages are filled with pointless anecdotes, dull sayings, and poetry whose only recommendation is its richness in the laboured conceits that he loved....