A Bookful of Girls 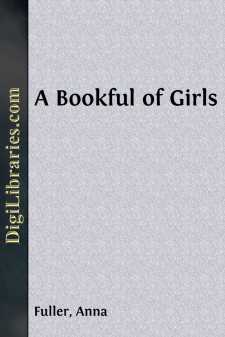 “You never told me how you happened to name her Blythe.”

The two old friends, Mr. John DeWitt and Mrs. Halliday, were reclining side by side in their steamer-chairs, lulled into a quiescent mood by the gentle, scarcely perceptible, motion of the vessel. It was an exertion to speak, and Mrs. Halliday replied evasively, “Do you like the name?”

“For Blythe,—yes. But I don’t know another girl who could carry it off so well. Tell me how it happened.”

Then Blythe’s mother reluctantly gathered herself together for a serious effort, and said: “It was the old Scotch nurse who did it. She called her ‘a blythe lassie’ before she was three days old. We had been hesitating between Lucretia for Charles’s mother and Hannah for mine, and we compromised on Blythe!”

Upon which the speaker, allowing her eyes to close definitively, took on the appearance of gentle inanition which characterised nine-tenths of her fellow-voyagers, ranged side by side in their steamer-chairs along the deck.

They had passed the Azores, that lovely May morning, and were headed for Cape St. Vincent,—the good old Lorelei lounging along at her easiest gait, the which is also her rapidest. For there is nothing more deceptive than a steamer’s behaviour on a calm day when the sea offers no perceptible resistance to the keel.

Here and there an insatiable novel-reader held a paper-covered volume before his nose, but more often the book had slid to the deck, to be picked up by Gustav, the prince of deck-stewards, and carefully tucked in among the wraps of the unconscious owner.

Just now, however, Gustav was enjoying a moment of unaccustomed respite from activity, for his most exacting beneficiaries were not sufficiently awake to demand a service of him. He had administered bouillon and lemonade and cracked ice by the gallon; he had scattered sandwiches and ginger cookies broadcast among them; he had tenderly inquired of the invalids, “’Ow you feel?” and had cheerfully pronounced them, one and all, to be “mush besser”; and now he himself was, for a fleeting moment, the centre of interest in the one tiny eddy of animation on the whole length of the deck.

Just aft of the awning, in the full sunshine, he was engaged in “posing,” with the sheepish air of a person having his photograph taken, while a fresh, comely girl of sixteen stood, kodak in hand, waiting for his attitude to relax. Half a dozen spectators, elderly men and small boys, stood about making facetious remarks, but Gustav and his youthful “operator” were too much in earnest to pay them much heed.

Blythe Halliday was usually very much in earnest; by which is not to be inferred that she was of an alarmingly serious cast of mind. Her earnestness took the form of intense satisfaction in the matter in hand, whatever that might be, and she had found life a succession of delightful experiences, of which this one of an ocean voyage was perhaps the most delectable of all.

In one particular Blythe totally disagreed with her mother; for Mrs....