A Book of the Play Studies and Illustrations of Histrionic Story, Life, and Character 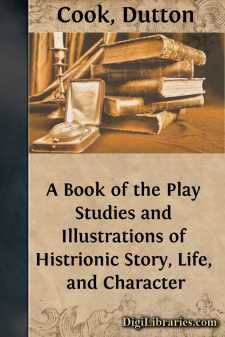 The man who, having witnessed and enjoyed the earliest performance of Thespis and his company, followed the travelling theatre of that primeval actor and manager, and attended a second and a third histrionic exhibition, has good claim to be accounted the first playgoer. For recurrence is involved in playgoing, until something of a habit is constituted. And usually, we may note, the playgoer is youthful. An old playgoer is almost a contradiction in terms. He is merely a young playgoer who has grown old. He talks of the plays and players of his youth, but he does not, in truth, visit the theatre much in his age; and invariably he condemns the present, and applauds the past. Things have much degenerated and decayed, he finds; himself among them, but of that fact he is not fully conscious. There are no such actors now as once there were, nor such actresses. The drama has declined into a state almost past praying for. This is, of course, a very old story. "Palmy days" have always been yesterdays. Our imaginary friend, mentioned above, who was present at the earliest of stage exhibitions, probably deemed the second and third to be less excellent than the first; at any rate, he assuredly informed his friends and neighbours, who had been absent from that performance, that they had missed very much indeed, and had by no means seen Thespis at his best. Even nowadays, middle-aged playgoers, old enough to remember the late Mr. Macready, are trumped, as it were, by older playgoers, boastful of their memories of Kemble and the elder Kean. And these players, in their day and in their turn, underwent disparagement at the hands of veterans who had seen Garrick. Pope, much as he admired Garrick, yet held fast to his old faith in Betterton. From a boy he had been acquainted with Betterton. He maintained Betterton to be the best actor he had ever seen. "But I ought to tell you, at the same time," he candidly admitted, "that in Betterton's time the older sort of people talked of Hart's being his superior, just as we do of Betterton's being superior to those now." So in the old-world tract, called "Historia Histrionica"—a dialogue upon the condition of the early stage, first published in 1699—Trueman, the veteran Cavalier playgoer, in reply to Lovewit, who had decided that the actors of his time were far inferior to Hart, Mohun, Burt, Lacy, Clun, and Shatterel, ventures to observe: "If my fancy and memory are not partial (for men of age are apt to be over-indulgent to the thoughts of their youthful days), I dare assure you that the actors I have seen before the war—Lowin, Taylor, Pollard, and some others—were almost as far beyond Hart and his company as those were beyond these now in being." In truth, age brings with it to the playhouse recollections, regrets, and palled appetite; middle life is too much prone to criticism, too little inclined to enthusiasm, for the securing of unmixed satisfaction; but youth is endowed with the faculty of admiring exceedingly, with hopefulness, and a keen sense of enjoyment, and, above all, with very complete power of self-deception. It is the youthful playgoers who are ever the best friends of the players.

As a rule, a boy will do anything, or almost anything, to go to a theatre. His delight in the drama is extreme—it possesses and absorbs him completely. Mr. Pepys has left on record Tom Killigrew's "way of getting to see plays when he was a boy." "He would go to the 'Red Bull' (at the upper end of St. John Street, Clerkenwell), and when the man cried to the boys—'Who will go and be a devil, and he shall see the play for nothing?' then would he go in and be a devil upon the stage, and so get to see plays." In one of his most delightful papers, Charles Lamb has described his first visit to a theatre. He "was not past six years old, and the play was 'Artaxerxes!' I had dabbled a little in the 'Universal History'—the ancient part of it—and here was the Court of Persia. It was being admitted to a sight of the past. I took no proper interest in the action going on, for I understood not its import, but I heard the word Darius, and I was in the midst of 'Daniel.' All feeling was absorbed in vision. Gorgeous vests, gardens, palaces, princesses, passed before me. I knew not players. I was in Persepolis for the time, and the burning idol of their devotion almost converted me into a worshipper....