A Book of Myths 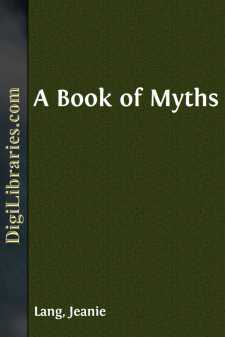 Just as a little child holds out its hands to catch the sunbeams, to feel and to grasp what, so its eyes tell it, is actually there, so, down through the ages, men have stretched out their hands in eager endeavour to know their God. And because only through the human was the divine knowable, the old peoples of the earth made gods of their heroes and not unfrequently endowed these gods with as many of the vices as of the virtues of their worshippers. As we read the myths of the East and the West we find ever the same story. That portion of the ancient Aryan race which poured from the central plain of Asia, through the rocky defiles of what we now call “The Frontier,” to populate the fertile lowlands of India, had gods who must once have been wholly heroic, but who came in time to be more degraded than the most vicious of lustful criminals. And the Greeks, Latins, Teutons, Celts, and Slavonians, who came of the same mighty Aryan stock, did even as those with whom they owned a common ancestry. Originally they gave to their gods of their best. All that was noblest in them, all that was strongest and most selfless, all the higher instincts of their natures were their endowment. And although their worship in time became corrupt and lost its beauty, there yet remains for us, in the old tales of the gods, a wonderful humanity that strikes a vibrant chord in the hearts of those who are the descendants of their worshippers. For though creeds and forms may change, human nature never changes. We are less simple than our fathers: that is all. And, as Professor York Powell most truly says: “It is not in a man’s creed, but in his deeds; not in his knowledge, but in his sympathy, that there lies the essence of what is good and of what will last in human life.”

The most usual habits of mind in our own day are the theoretical and analytical habits. Dissection, vivisection, analysis—those are the processes to which all things not conclusively historical and all things spiritual are bound to pass. Thus we find the old myths classified into Sun Myths and Dawn Myths, Earth Myths and Moon Myths, Fire Myths and Wind Myths, until, as one of the most sane and vigorous thinkers of the present day has justly observed: “If you take the rhyme of Mary and her little lamb, and call Mary the sun and the lamb the moon, you will achieve astonishing results, both in religion and astronomy, when you find that the lamb followed Mary to school one day.”

In this little collection of Myths, the stories are not presented to the student of folklore as a fresh contribution to his knowledge. Rather is the book intended for those who, in the course of their reading, frequently come across names which possess for them no meaning, and who care to read some old stories, through which runs the same humanity that their own hearts know. For although the old worship has passed away, it is almost impossible for us to open a book that does not contain some mention of the gods of long ago....