A Book of Exposition 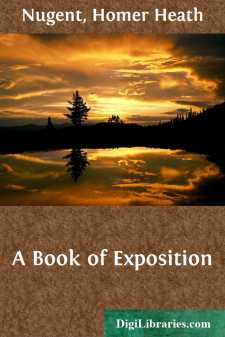 The articles here presented are modern and unhackneyed. Selected primarily as models for teaching the methods of exposition employed in the explanation of mechanisms, processes, and ideas, they are nevertheless sufficiently representative of certain tendencies in science to be of intrinsic value. Indeed, each author is a recognized authority.

Another feature is worthy of mention. Although the material covers so wide a field—anatomy, zoölogy, physics, psychology, and applied science—that the collection will appeal to instructors in every type of college and technical school, the selections are related in such a way as to produce an impression of unity. This relation is apparent between the first selection, which deals with the student's body, and the third, which deals with another organism in nature. The second and fourth selections deal with kindred aspects of modern industry—the manufacture of paper and the Linotype machine, by which it is used. The fifth selection is a protest against certain developments of the industrial regime; the last, an attempt to reconcile the spirit of science with that of religion. While monotony has been avoided, the essays form a distinct unit.

In most cases, selections are longer than usual, long enough in fact to introduce a student to each field. As a result, he can be made to feel that every subject is of importance and to realize that every chapter contains a fund of valuable information. Instead of confusing him by having him read twenty selections in, let us say, six weeks, it is possible by assigning but six in the same period, to impress him definitely with each.

The text-book machinery has been sequestered in the Biographical and Critical Notes at the end of the book. Their character and position are intended to permit instructors freedom of treatment. Some may wish to test a student's ability in the use of reference books by having him report on allusions. Some may wish to explain these themselves. A few may find my experience helpful. For them suggestions are included in the Critical Notes. In general, I have assumed that instructors will prefer their own methods and have tried to leave them unhampered.

In all the foregoing chapters we have been considering only the muscular engines of the human machine, counting them over and comparing their construction and their mechanism with those of the internal-combustion engine of a motor cycle. But of the levers or crank-pins through which muscular engines exert their power we have said nothing hitherto. Nor shall we get any help by now spending time on the levers of a motor cycle. We have already confessed that they are arranged in a way which is quite different from that which we find in the human machine. In the motor cycle all the levers are of that complex kind which are called wheels, and the joints at which these levers work are also circular, for the joints of a motor cycle are the surfaces between the axle and the bushes, which have to be kept constantly oiled. No, we freely admit that the systems of levers in the human machine are quite unlike those of a motor cycle. They are more simple, and it is easy to find in our bodies examples of all the three orders of levers. The joints at which bony levers meet and move on each other are very different from those we find in motor cycles. Indeed, I must confess they are not nearly so simple. And, lastly, I must not forget to mention another difference. These levers we are going to study are living—at least, are so densely inhabited by myriads of minute bone builders that we must speak of them as living. I want to lay emphasis on that fact because I did not insist enough on the living nature of muscular engines.

Fig. 1.—Showing a chisel 10 inches long used as a lever of the first order.

We are all well acquainted with levers. We apply them every day. A box arrives with its lid nailed down; we take a chisel, use it as a lever, pry the lid open, and see no marvel in what we have done (Fig. 1). And yet we thereby did with ease what would have been impossible for us even if we had put out the whole of our unaided strength. The use of levers is an old discovery; more than 1500 years before Christ, Englishmen, living on Salisbury Plain, applied the invention when they raised the great stones at Stonehenge and at Avebury; more than 2000 years earlier still, Egyptians employed it in raising the pyramids. Even at that time men had made great progress; they were already reaping the rewards of discoveries and inventions. But none, I am sure, surprised them more than the discovery of the lever; by its use one man could exert the strength of a hundred men. They soon observed that levers could be used in three different ways. The instance already given, the prying open of a lid by using a chisel as a lever, is an example of one way (Fig. 1); it is then used as a lever of the first order. Now in the first order, one end of the lever is applied to the point of resistance, which in the case just mentioned was the lid of the box. At the other end we apply our strength, force, or power....