A Book of Discovery The History of the World's Exploration, From the Earliest Times to the Finding of the South Pole

by M. B. (Margaret Bertha) Synge 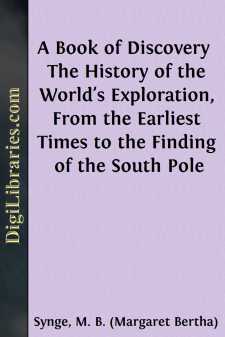 INTRODUCTION "Hope went before them, and the world was wide."

Such was the spirit in which the exploration of the world was accomplished. It was the inspiration that carried men of old far beyond the sunrise into those magic and silent seas whereon no boat had ever sailed. It is the incentive of those to-day with the wander-thirst in their souls, who travel and suffer in the travelling, though there are fewer prizes left to win. But

"The reward is in the doing, And the rapture of pursuing Is the prize."

"To travel hopefully," says Stevenson, "is a better thing than to arrive." This would explain the fact that this Book of Discovery has become a record of splendid endurance, of hardships bravely borne, of silent toil, of courage and resolution unequalled in the annals of mankind, of self-sacrifice unrivalled and faithful lives laid ungrudgingly down. Of the many who went forth, the few only attained. It is of these few that this book tells.

"All these," says the poet in Ecclesiastes—"all these were honoured in their generation, and were the glory of their times ... their name liveth for evermore."

But while we read of those master-spirits who succeeded, let us never forget those who failed to achieve.

"Anybody might have found it, but the Whisper came to Me."

Enthusiasm too was the secret of their success. Among the best of crews there was always some one who would have turned back, but the world would never have been explored had it not been for those finer spirits who resolutely went on—even to the death.

This is what carried Alexander the Great to the "earth's utmost verge," that drew Columbus across the trackless Atlantic, that nerved Vasco da Gama to double the Stormy Cape, that induced Magellan to face the dreaded straits now called by his name, that made it possible for men to face without flinching the ice-bound regions of the far North.

"There is no land uninhabitable, nor sea unnavigable," asserted the men of the sixteenth century, when England set herself to take possession of her heritage in the North. Such an heroic temper could overcome all things. But the cost was great, the sufferings intense.

"Having eaten our shoes and saddles boiled with a few wild herbs, we set out to reach the kingdom of gold," says Orellana in 1540.

"We ate biscuit, but in truth it was biscuit no longer, but a powder full of worms,—so great was the want of food, that we were forced to eat the hides with which the mainyard was covered; but we had also to make use of sawdust for food, and rats became a great delicacy," related Magellan, as he led his little ship across the unknown Pacific.

Again, there is Franklin returning from the Arctic coast, and stilling the pangs of hunger with "pieces of singed hide mixed with lichen," varied with "the horns and bones of a dead deer fried with some old shoes."

The dangers of the way were manifold.

For the early explorers had no land map or ocean chart to guide them, there were no lighthouses to warn the strange mariner of dangerous coast and angry surf, no books of travel to relate the weird doings of fierce and inhospitable savages, no tinned foods to prevent the terrible scourge of sailors, scurvy....