A Blot in the 'Scutcheon 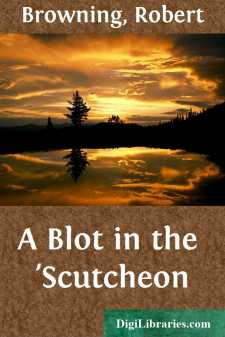 ROBERT BROWNING stands, in respect to his origin and his career, in marked contrast to the two aristocratic poets beside whose dramas his "Blot in the 'Scutcheon" is here printed. His father was a bank clerk and a dissenter at a time when dissent meant exclusion from Society; the poet went neither to one of the great public schools nor to Oxford or Cambridge; and no breath of scandal touched his name. Born in London in 1812, he was educated largely by private tutors, and spent two years at London University, but the influence of his father, a man of wide reading and cultivated tastes, was probably the most important element in his early training. He drew well, was something of a musician, and wrote verses from an early age, though it was the accidental reading of a volume of Shelley which first kindled his real inspiration. This indebtedness is beautifully acknowledged in his first published poem, "Pauline" (1833).

Apart from frequent visits to Italy, there is little of incident to chronicle in Browning's life, with the one great exception of his more than fortunate marriage in 1846 to Elizabeth Barrett, the greatest of English poetesses.

Browning's dramatic period extended from 1835 to the time of his marriage, and produced some nine plays, not all of which, however, were intended for the stage. "Paracelsus," the first of the series, has been fairly described as a "conversational drama," and "Pippa Passes," though it has been staged, is essentially a poem to read. The historical tragedy of "Strafford" has been impressively performed, but "King Victor and King Charles," "The Return of the Druses," "Colombe's Birthday," "A Soul's Tragedy," and "Luria," while interesting in many ways, can hardly be regarded as successful stage-plays. "A Blot in the 'Scutcheon" was performed at Drury Lane, but its chances of a successful run were spoiled by the jealousy of Macready, the manager.

The main cause of Browning's weakness as a playwright lay in the fact that he was so much more interested in psychology than in action. But in the present tragedy this defect is less prominent than usual, and in spite of flaws in construction, it reaches a high pitch of emotional intensity, the characters are drawn with vividness, and the lines are rich in poetry.

A BLOT IN THE 'SCUTCHEON A TRAGEDY (1843) DRAMATIS PERSONAEMILDRED TRESHAM.GUENDOLEN TRESHAM.THOROLD, Earl Tresham.AUSTIN TRESHAM.HENRY, Earl Mertoun.GERARD, and other retainers of Lord Tresham.Time, 17— ACT I SCENE I.—The Interior of a Lodge in Lord Tresham's Park.Many Retainers crowded at the window, supposed to commanda view of the entrance to his Mansion.GERARD, the Warrener, his back to a table on which are flagons,etc.FIRST RETAINER. Ay, do! push, friends, and then you'll push down me!—What for? Does any hear a runner's footOr a steed's trample or a coach-wheel's cry?Is the Earl come or his least poursuivant?But there's no breeding in a man of youSave Gerard yonder: here's a half-place yet,Old Gerard...!
Show more
Show less