A Bit of Old China 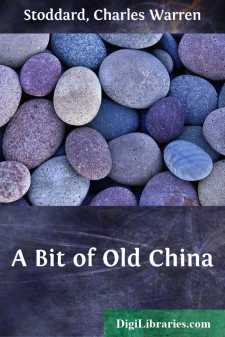 "It is but a step from Confucius to confusion," said I, in a brief discussion of the Chinese question. "Then let us take it by all means," replied the artist, who had been an indulgent listener for at least ten minutes.

We were strolling upon the verge of the Chinese Quarter in San Francisco, and, turning aside from one of the chief thoroughfares of the city, we plunged into the busiest portion of Chinatown. From our standpoint—the corner of Kearny and Sacramento Streets—we got the most favorable view of our Mongolian neighbors. Here is a goodly number of merchant gentlemen of wealth and station, comfortably, if not elegantly, housed on two sides of a street that climbs a low hill quite in the manner of a tea-box landscape.

A few of these gentlemen lodge on the upper floors of their business houses, with Chinese wives, and quaint, old-fashioned children gaudily dressed, looking like little idols, chatting glibly with one another, and gracefully gesticulating with hands of exquisite slenderness. Confucius, in his infancy, may have been like one of the least of these. There are white draymen and porters in the employ of these shrewd and civil merchants, and the outward appearance of traffic, as conducted in the immediate vicinity, is rather American than otherwise.

Farther up the hill, on Dupont Street, from California to Pacific Streets, the five blocks are almost monopolized by the Chinese. There is, at first, a sprinkling of small shops in the hands of Jews and Gentiles, and a mingling of Chinese bazaars of the half-caste type, where American and English goods are exposed in the show-windows; but as we pass on the Asiatic element increases, and finally every trace of alien produce is withdrawn from the shelves and counters.

Here little China flaunts her scarlet streamers overhead, and flanks her doors with legends in saffron and gold; even its window-panes have a foreign look, and within is a glimmering of tinsel, a subdued light, and china lamps flickering before graven images of barbaric hideousness. The air is laden with the fumes of smoking sandalwood and strange odors of the East; and the streets, swarming with coolies, resound with the echoes of an unknown tongue. There is hardly room for us to pass; we pick our way, and are sometimes curiously regarded by slant-eyed pagans, who bear us no good-will, if that shadow of scorn in the face has been rightly interpreted. China is not more Chinese than this section of our Christian city, nor the heart of Tartary less American.

Turn which way we choose, within two blocks, on either hand we find nothing but the infinitely small and astonishingly numerous forms of traffic on which the hordes around us thrive. No corner is too cramped for the squatting street cobbler; and as for the pipe-cleaners, the cigarette-rollers, the venders of sweetmeats and conserves, they gather on the curb or crouch under overhanging windows, and await custom with the philosophical resignation of the Oriental.

On Dupont Street, between Clay and Sacramento Streets—a single block,—there are no less than five basement apartments devoted exclusively to barbers. There are hosts of this profession in the quarter. Look down the steep steps leading into the basement and see, at any hour of the day, with what deft fingers the tonsorial operators manipulate the devoted pagan head....