A Bird Calendar for Northern India 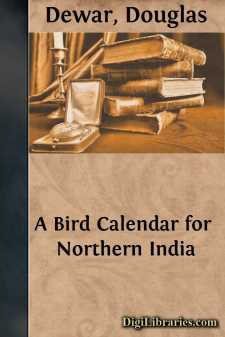 JANUARY Up—let us to the fields away,And breathe the fresh and balmy air. MARY HOWITT.

Take nine-and-twenty sunny, bracing English May days, steal from March as many still, starry nights, to these add two rainy mornings and evenings, and the product will resemble a typical Indian January. This is the coolest month in the year, a month when the climate is invigorating and the sunshine temperate. But even in January the sun's rays have sufficient power to cause the thermometer to register 70° in the shade at noon, save on an occasional cloudy day.

Sunset is marked by a sudden fall of temperature. The village smoke then hangs a few feet above the earth like a blue-grey diaphanous cloud.

The cold increases throughout the hours of darkness. In the Punjab hoar-frosts form daily; and in the milder United Provinces the temperature often falls sufficiently to allow of the formation of thin sheets of ice. Towards dawn mists collect which are not dispersed until the sun has shone upon them for several hours. The vultures await the dissipation of these vapours before they ascend to the upper air, there to soar on outstretched wings and scan the earth for food.

On New Year's Day the wheat, the barley, the gram, and the other Spring crops are well above the ground, and, ere January has given place to February, the emerald shoots of the corn attain a height of fully sixteen inches. On these the geese levy toll.

Light showers usually fall in January. These are very welcome to the agriculturalist because they impart vigour to the young crops. In the seasons when the earth is not blessed with the refreshing winter rain men and oxen are kept busy irrigating the fields. The cutting and the pressing of the sugar-cane employ thousands of husbandmen and their cattle. In almost every village little sugar-cane presses are being worked by oxen from sunrise to sunset. At night-time the country-side is illumined by the flames of the burned by the rustic sugar-boilers.

January is the month in which the avian population attains its maximum. Geese, ducks, teal, pelicans, cormorants, snake-birds and ospreys abound in the rivers and ; the marshes and swamps are the resort of millions of snipe and other waders; the fields and groves swarm with flycatchers, chats, starlings, warblers, finches, birds of prey and the other migrants which in winter visit the plains from the Himalayas and the country beyond.

The bracing climate of the Punjab attracts some cold-loving species for which the milder United Provinces have no charms. Conspicuous among these are rooks, ravens and jackdaws. On the other hand, frosts drive away from the Land of the Five Rivers certain of the feathered folk which do not leave the United Provinces or Bengal: to wit, the purple sunbird, the bee-eater and, to a large extent, the king-crow.

The activity of the feathered folk is not at its height in January. Birds are warm-blooded creatures and they love not the cold. Comparatively few of them are in song, and still fewer nest, at this season....