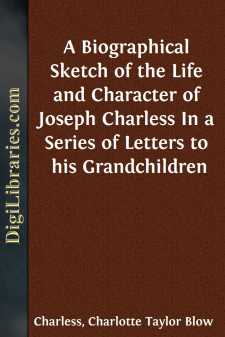 We are reminded daily of the uncertainty of human life: for the young and the old, the gay and the grave, the good and the wicked, are subject to death. Young people do not realize this, but it is nevertheless true, and before you are old enough, my children, to understand and lay to heart all that your mother would tell you of her dearly beloved father, she may be asleep with grandma, close beside him in Bellefontaine. An earthly inheritance is highly esteemed among men. For this reason great efforts are made by them to lay up treasures for their children. They know not, however, who shall gather them, for riches take to themselves wings and fly away. But a good man leaveth an inheritance to his children, and to his childrens children, which is as stable as the throne of the Most High. Like the stream that gathers strength from every rivulet, and grows deeper, and broader, and more majestic, until the myriads of crystal drops are received into the bosom of the mighty deep, so likewise is the legacy of a good man. It descends to his child by birthright, and through the rich mercy of a covenant-keeping God, widens and extends its life-giving power, flowing on and on, as rivers of water, into the boundless ocean of Gods love.

Your grandfather, my beloved children, was a great man. Not as a warrior, nor as a statesman, nor in any sense which is simply of the earth, earthy. But he was great by being the possessor of a rare combination of moral worth and Christian excellence, which made him a blessing to his race. In other words, he was great because he was truly good. In the midst of his days of usefulness he was cut off from the land of the living. His precious remains rest quietly in the fresh made grave; his immortal spirit has winged its flight to the mansions of the blessed, for blessed are the dead who die in the Lord, for they rest from their labors, and their works do follow them.

While endeavoring, in much weakness, to put together for your perusal such facts as may present to your minds a faithful likeness of the noble man from whom you have descended, I sincerely pray that you may be stimulated, by the grace of God, to follow him even as he followed Christ.

If you will look in your mothers Bible, you will find that your grandfather, JOSEPH CHARLESS, was born in Lexington, Kentucky, on the 17th of January, 1804; that his father, whose name was also Joseph Charless, was born July 16th, 1772, in Westmeath, Ireland, being the only son of Captain Edward Charles, whose father, (or paternal ancestor, John Charles), was born in Wales and emigrated to Ireland in the year 1663.

Your great-grandfather, Jos. Charles, fled from his native country to France, in consequence of his having been implicated in the Rebellion of 1795, at the head of which figured the young and noble Emmet, who fell a sacrifice for loving too well his enslaved country. After remaining a short time in France, he sailed for the United States of America, where he arrived in 1796, landing at the city of New York....