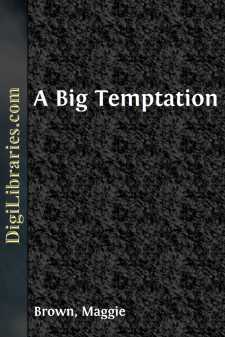 Netty stood on the doorstep of a rickety old house and nursed the baby. She was ten years old and had the perfectly white face of a child who had never felt any fresher air than that which blows in a London court.

It is true that the year before she had gone with her brother Ben into the country. The Ladies' Committee of the Holiday Fund had arranged the matter, and Netty and Ben had gone away. They had spent a whole delicious fortnight in a place where trees waved, and the air blew fresh, and there were lots of wildflowers to pick; and she had run about under the trees, and slept at night in the tiniest little room in the world, and in the cleanest bed, and had awakened each morning to hear the doves cooing and the birds singing, and she had thought then that no happiness could be greater than hers.

This had happened a year ago, and since then a new baby had arrived, and the baby was rather sickly, and whenever Netty was not at school she was lugging the baby about or trying to rock him to sleep. She was baby's nurse, and she was not at all sorry, for she loved the baby and the occupation gave her time to dream.

Netty had big dark-blue eyes, which showed bigger and darker than ever in the midst of her white little face. She could talk to the baby about the country. How often she had told him the story of that brief fortnight!

"And you know, baby, there were real flowers growing; we picked them, Ben and I, and we rolled about in the grass; yes, we did. You needn't believe it unless you like, baby, but we did. Oh! it was fine. I had no headaches there, and I could eat almost anything, and if you never heard doves cooing, why, you never heard what's really pretty. But never mind: your time will come—not yet awhile, but some day."

On this particular July afternoon the sun was so hot and the air so close that even Netty could not find it in her heart to be cheerful.

"Oh, dear!" she said, with a deep sigh, "I do wish it were my turn for the country this year. I would take you with me—yes, I would, baby. I wouldn't mind a bit lugging you about, though you are getting heavy. I wish it were my luck to be going this year, but there isn't a chance."

She had scarcely uttered the last words before Ben's face was seen peeping at her from behind a corner.

Ben was a year older than his sister; he had long trousers very much patched about the knees, and a shock head of rough red hair. Next to baby, Netty loved him best in the world. He beckoned to her now, looking very knowing.

"I say, come here—here's a lark," he said; "come round the corner and I'll show you something."

Netty jumped up and, staggering under the weight of the heavy baby, approached the spot where Ben was waiting for her.

"Such a lark!" he continued; "you never heard tell anything like it. I say, Netty, what do you say to the seaside for a whole day, you and me together? We can go, yes, we can. To-morrow's the day; I have the tickets. What do you say?"