A Bibliographical, Antiquarian and Picturesque Tour in France and Germany, Volume One 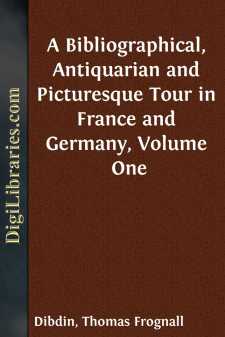 PREFACE TO THE SECOND EDITION.

If I had chosen to introduce myself to the greatest possible advantage to the reader, in this Preface to a Second Edition of the "Bibliographical, Antiquarian, and Picturesque Tour," I could not have done better than have borrowed the language of those Foreigners, who, by a translation of the Work (however occasionally vituperative their criticisms) have, in fact, conferred an honour upon its Author. In the midst of censure, sometimes dictated by spite, and sometimes sharpened by acrimony of feeling, it were in my power to select passages of commendation, which would not less surprise the Reader than they have done myself: while the history of this performance may be said to exhibit the singular phenomenon, of a traveller, usually lauding the countries through which he passes, receiving in return the reluctant approbation of those whose institutions, manners, and customs, have been praised by him. It is admitted, by the most sedulous and systematic of my opponents--M. CRAPELET--that "considering the quantity and quality of the ornaments and engravings of this Tour, one is surprised that its cost is so moderate."

"Few books (says the Bibliographer of Dijon) have been executed with greater luxury. It is said that the expenses of printing and engraving amounted to 6000 l.--to nearly 140,000 franks of our money. It must be admitted that England is the only country in which such an undertaking could be carried into effect. Who in France would dare to risk such a sum-- especially for three, volumes in octavo? He would be ruined, if he did." I quote these passages simply to shew under what extraordinary obliquity of feeling those gentlemen must have set down to the task of translation and abuse--of THAT VERY WORK, which is here admitted to contain such splendid representations of the "bibliographical, antiquarian, and picturesque" beauties of their country.

A brief account of this foreign travail may be acceptable to the curious in literary history. MONS. LICQUET, the successor of M. Gourdin, as Chief Librarian to the Public Library at Rouen, led the way in the work of warfare. He translated the ninth Letter relating to that Public Library; of which translation especial mention is made at p. 99, post. This version was printed in 1821, for private, distribution; and only 100 copies were struck off. M. Crapelet, in whose office it was printed, felt the embers of discontent rekindled in his bosom as it passed through his press; and in the following year HE also stepped forward to discharge an arrow at the Traveller. Like his predecessor, he printed but a limited number; and as I have more particularly remarked upon the spirit of that version by way of "Introduction" to the original letter, in vol. ii. 209, &c. I shall not waste the time of the Reader by any notice of it in the present place. These two partial translators united their forces, about two years afterwards, and published the whole of the Tour, as it related to FRANCE, in four octavo volumes, in 1825....