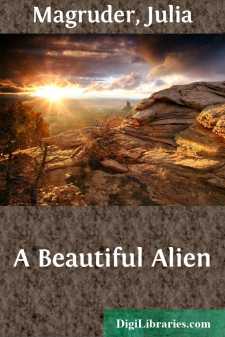 Add to My Favorites
Published: 8 years ago
Downloads: 100
Rating: (0 Votes)

A Beautiful Alien I.

On the deck of an ocean steamer, homeward bound from Europe, a man and girl were walking to and fro. Their long march of monotonous regularity had lasted perhaps an hour, and they had become objects of special attention to the people scattered about.

A man, who was taking his afternoon exercise alone, and who had accidentally fallen into line directly behind this couple, kept that position purposely, turning as they turned, and, without seeming to do so, observing them narrowly, for the reason that the woman was uncommonly beautiful.

This man—Albert Noel by name—was an artist by instinct and habit, though a lawyer by profession. He painted pictures for love and practised law for money, or conventionality, or to please his mother and sisters, or from some reason which, however indefinite, had been strong enough to predominate over the longing he had always had to go to Paris, live in the Latin Quarter, and be simply and honestly what his taste dictated. Few people, perhaps, suspected his Bohemian proclivities; for he lived an extremely conventional life, was the idol of his mother and sisters, and, being well born, well-off, and sufficiently good-looking, was regarded as an excellent match matrimonially. In spite of this fact he had never been known to be seriously in love; though, being a quiet man, this experience might have befallen him without the knowledge of his friends. He was coming home from Europe now, reluctantly and with regret; but, since he had a profession, it must be attended to.

He observed the tall young woman who walked in front of him on her husband’s arm (some instinct told him that it was her husband) from an artist’s standpoint only. It had occurred to him that here was a remarkable model for a picture. He furtively studied the lines of her figure, which was clad in a long, tight-fighting cloak, trimmed with fur, and the contour and color of the knot of brown hair, whose living lustre shone richly between the dull fur that bordered her collar and her hat. Every moment the study fascinated him more, as he followed and turned, as they turned. Suddenly it struck him that perhaps his interest in the pair ahead of him might, in spite of him, be observed; and so, rather reluctantly, he took a seat in one of several empty chairs at the steamer’s stern. Here he could still observe them, at intervals, as they came and went. They spoke to no one, not even to each other, though he was convinced they were newly married. Both of them looked very young.

After a few turns the lady complained of being tired, and proposed they should sit down. Her companion assented by a nod, and they took the seats next to Noel. She spoke English, but with much hesitation and with a strong foreign accent. The man was silent still, as they seated themselves and wrapped their rugs about them; for in spite of the full blaze of the sinking sun it was very cold. Noel also kept still, looking and listening. He was a little back of them, and only her pure profile was visible to him....