A Apple Pie and Other Nursery Tales 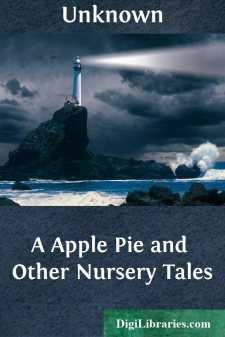 Miss Tabitha Pussycat was a quiet, sleek, old creature, and was so prim, that her friends called her an old maid; and some of them even said that she was an old cat, but they were the people who were not asked to her nice tea parties. When she gave a tea party, she sent her page Jacko to invite her friends. Jacko was a clever monkey, who had come from his last place at the Zoological Gardens, where he had been used to see a great deal of company.

One day Miss Tabitha made up her mind to have a larger party than usual, so she sent out for a dish of pink shrimps, a bag of muffins, a tea-cake, a new French loaf, and a pound of fresh butter. Then she sent Jacko out in his new coat to invite her friends.

Mr. Velvet-Purr and other visitors arrive at Miss Tabitha's.

First, there was Mr. Velvet Purr, a quiet old bachelor, who sat nearly all day in the sun on a garden seat watching the birds, but who was much too well fed to catch mice. Miss Velveteen Purr, his sister, went with him, she was a very pretty singer, wore a fur tippet, and drank a good deal of milk to soften her voice.

Sir Claude Scratch was a very different person. He was proud of his high family, for his father was second cousin to Dick Whittington's Cat, and had seen a great deal of the world. Sir Claude was very proud of his whiskers, and before he went to the tea party, he called on Frizzle Frog, the barber, to be shaved. While he sat there, with the towel under his chin, who should look in, but his friend Captain Black, a very fierce looking fellow, who had killed hundreds of rats, and was always ready to fight. He was a great favourite of the ladies, and said he would go to tea though he had not been invited.

Sir Claude Scratch calls on Frizzle Frog the barber, and while he is being shaved, Captain Black drops in.

The four Misses White were already on their way to Miss Pussycat's house in their clean stockings, and the nice silky dresses that their mother had given them. Old Mrs. White lived at the baker's round the corner, and her daughters' names were Fluffy, Tibby, Titty, and Tip; all of them famous for their beautiful skins and their bright eyes. You may be sure that the four Masters Tortoise Shell were waiting for them, for they had been ready all the afternoon, with their tail-coats on, for the purpose of walking with these charming young ladies. They were very young gentlemen, so that they were quite proud at being asked.

It was a very grand tea table, and when all the party sat down it was more than Jacko could do to wait upon them,—but the gentlemen handed the tea to the ladies, and picked out the largest shrimps for the Misses White, and nearly emptied the cream jug for Miss Velvet Purr, and helped themselves to muffins, and were very merry indeed.

Captain Black was so attentive that he would hand round the bread and butter. He took the plate from under the very nose of Sir Claude Scratch, which made that person so angry, that nothing but a smile from Miss Tabitha would please him.