Vestiges of the Mayas or, Facts Tending to Prove that Communications and Intimate Relations Must Have Existed, in very Remote Times, Between the Inhabitants of Mayab and Those of Asia and Africa 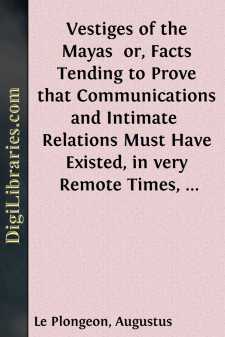 VESTIGES OF THE MAYAS.

Yucatan is the peninsula which divides the Gulf of Mexico from the Caribbean Sea. It is comprised between the 17° 30´ and 21° 50´, of latitude north, and the 88° and 91° of longitude west from the Greenwich meridian.

The whole peninsula is of fossiferous limestone formation. Elevated a few feet only above the sea, on the coasts, it gradually raises toward the interior, to a maximum height of above 70 feet. A bird’s-eye view, from a lofty building, impresses the beholder with the idea that he is looking on an immense sea of verdure, having the horizon for boundary; without a hill, not even a hillock, to break the monotony of the landscape. Here and there clusters of palm trees, or artificial mounds, covered with shrubs, loom above the green dead-level as islets, over that expanse of green foliage, affording a momentary relief to the eyes growing tired of so much sameness.

About fifty miles from the northwestern coast begins a low, narrow range of hills, whose highest point is not much above 500 feet. It traverses the peninsula in a direction a little south from east, commencing a few miles north from the ruined city of Uxmal, and terminating some distance from the eastern coast, opposite to the magnificent bay of Ascension.

Lately I have noticed that some veins of red oxide of iron exist among these hills—quarries of marble must also be found there; since the sculptured ornaments that adorn the facade of all the monuments at Uxmal are of that stone. To-day the inhabitants of Yucatan are even ignorant of the existence of these minerals in their country, and ocher to paint, and marble slabs to floor their houses, are imported from abroad. I have also discovered veins of good lithographic stones that could be worked at comparatively little expense.

The surface of the country is undulating; its stony waves recall forcibly to the mind the heavy swell of mid-ocean. It seems as if, in times long gone by, the soil was upheaved, en masse, from the bottom of the sea, by volcanic forces. This upheaval must have taken place many centuries ago, since isolated columns of Katuns 1m. 50c. square, erected at least 6,000 years ago, stand yet in the same perpendicular position, as at the time when another stone was added to those already piled up, to indicate a lapse of twenty years in the life of the nation.

It is, indeed, a remarkable fact, that whilst the surrounding countries—Mexico, Guatemala, Cuba and the other West India Islands—are frequently convulsed by earthquakes, the peninsula of Yucatan is entirely free from these awe-inspiring convulsions of mother earth. This immunity may be attributed, in my opinion, to the innumerable and extensive caves with which the whole country is entirely honeycombed; and the large number of immense natural wells, called Senotes, that are to be found everywhere. These caves and senotes afford an outlet for the escape of the gases generated in the superficial strata of the earth. These, finding no resistance to their passage, follow, harmlessly, these vents without producing on the surface any of those terrible commotions that fill the heart of man and beast alike with fright and dismay....