Travels in North America, From Modern Writers With Remarks and Observations; Exhibiting a Connected View of the Geography and Present State of that Quarter of the Globe 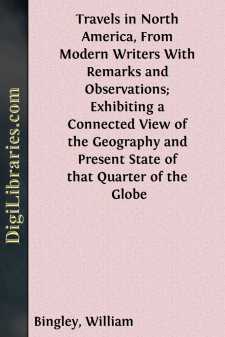 This division of the great western continent is more than five thousand miles in length; and, in some latitudes, is four thousand miles wide. It was originally discovered by Europeans, about the conclusion of the fifteenth century; and, a few years afterwards, a party of Spanish adventurers obtained possession of some of the southern districts. The inhabitants of these they treated like wild animals, who had no property in the woods through which they roamed. They expelled them from their habitations, established settlements; and, taking possession of the country in the name of their sovereign, they appropriated to themselves the choicest and most valuable provinces. Numerous other settlements have since been established in different parts of the country; and the native tribes have nearly been exterminated, while the European population and the descendants of Europeans, have so much increased that, in the United States only, there are now more than ten millions of white inhabitants.

The surface of the country is extremely varied. A double range of mountains extends through the United States, in a direction, from south-west to north-east; and another range traverses nearly the whole western regions, from north to south. No part of the world is so well watered with rivulets, rivers, and lakes, as this. Some of the lakes resemble inland seas. Lake Superior is nearly 300 miles long, and is more than 150 miles wide; and lakes Huron, Michigan, Erie, Ontario, and Champlain, are all of great size. The principal navigable rivers of America are the Mississippi, the Ohio, the Missouri, and the Illinois. Of these the Mississippi flows from the north, and falls into the Gulf of Mexico. The Ohio flows into the Mississippi: it extends in a north-easterly direction, and receives fifteen large streams, all of which are navigable. The Missouri and the Illinois also flow into the Mississippi: and, by means of these several rivers, a commercial intercourse is effected, from the ocean to vast distances into the interior of the country. Other important rivers are the Delaware and the Hudson, in the United States, and the St. Lawrence, in Canada. The bays and harbours of North America are numerous, and many of them are well adapted for the reception and protection of ships. Hudson's Bay is of greater extent than the whole Baltic sea. Delaware Bay is 60 miles long; and, in some parts, is so wide, that a vessel in the middle of it cannot be seen from either bank. Chesapeak Bay extends 270 miles inland. The Bay of Honduras is on the south-eastern side of New Spain, and is noted for the trade in logwood and mahogany, which is carried on upon its banks.

The natural productions of North America are, in many respects, important. The forests abound in valuable timber-trees; among which are enumerated no fewer than forty-two different species of oaks. Fruit-trees of various kinds are abundant; and, in many places, grapes grow wild: the other vegetable productions are numerous and important....