Travels in France during the years 1814-15 Comprising a residence at Paris, during the stay of the allied armies, and at Aix, at the period of the landing of Bonaparte, in two volumes. 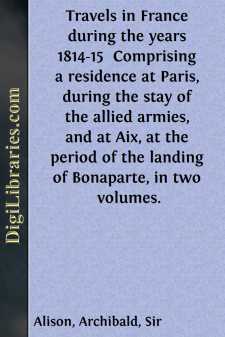 We passed through Kent in our way to France, on Sunday the first of May 1814. This day's journey was very delightful. The whole scenery around us,—the richness of the fields and woods, then beginning to assume the first colours of spring; the extent and excellence of the cultivation; the thriving condition of the towns, and the smiling aspect of the neat and clean villages through which we passed; the luxuriant bloom of the fruit-trees surrounding them; the number of beautiful villas adapted to the accommodation of the middle ranks of society, the crowds of well-dressed peasantry going to and returning from church; the frank and cheerful countenances of the men, and beauty of the women—all presented a most pleasing spectacle. If we had not proposed to cross the channel, we should have compared all that we now saw with our recollections of Scotland; and the feeling of the difference, although it might have increased our admiration, would perhaps have made us less willing to acknowledge it. But when we were surveying England with a view to a comparison with France, the difference of its individual provinces was overlooked;—we took a pride in the apparent happiness and comfort of a people, of whom we knew nothing more, than that they were our countrymen; and we rejoiced, that the last impression left on our minds by the sight of our own country, was one which we already anticipated that no other could efface.

Our passage to Calais was rendered very interesting, by the number of Frenchmen who accompanied us. Some of these were emigrants, who had spent the best part of their lives in exile; the greater part were prisoners of various ranks, who had been taken at different periods of the war. There was evidently the greatest diversity of character, of prospects, of previous habits, and of political and moral sentiments among these men; the only bond that connected them was, the love of their common country; and at a moment for which they had been so long and anxiously looking, this was sufficient to repress all jealousy and discord, and to unite them cordially and sincerely in the sentiment which was expressed, with true French enthusiasm, by one of the party, as we left the harbour of Dover,—"Voila notre chere France,—A present nous sommes tous amis!"

As we proceeded, the expression of their emotions, in words, looks, and gestures, was sometimes extremely pleasing, at other times irresistibly ludicrous, but always characteristic of a people whose natural feelings are quick and lively, and who have no idea of there being any dignity or manliness in repressing, or concealing them. When the boat approached the French shore, a fine young officer, who had been one of the most amusing of our companions, leapt from the prow, and taking up a handful of sand, kissed it with an expression of ardent feeling and enthusiastic joy, which it was delightful to observe.

It is only on occasions of this kind, that the whole strength of the feeling of patriotism is made known....