Travels in China, Containing Descriptions, Observations, and Comparisons, Made and Collected in the Course of a Short Residence at the Imperial Palace of Yuen-Min-Yuen, and on a Subsequent Journey through the Country from Pekin to Canton 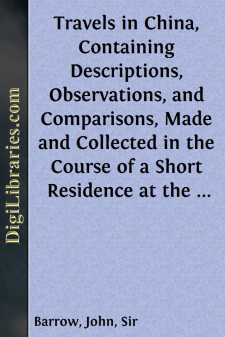 Add to My Favorites
Published: 8 years ago
Downloads: 65
Rating: (0 Votes)

It is hardly necessary to observe that, after the able and interesting account of the proceedings and result of the British Embassy to the court of China, by the late Sir George Staunton (who was no less amiable for liberality of sentiment, than remarkable for vigour of intellect) it would be an idle, and, indeed, a superfluous undertaking, in any other person who accompanied the embassy, to dwell on those subjects which have been treated by him in so masterly a manner; or to recapitulate those incidents and transactions, which he has detailed with equal elegance and accuracy.

But, as it will readily occur to every one, there are still many interesting subjects, on which Sir George, from the nature of his work, could only barely touch, and others that did not come within his plan, one great object of which was to unfold the views of the embassy, and to shew that every thing, which could be done, was done, for promoting the interests of the British nation, and supporting the dignity of the British character; the Author of the present work has ventured, though with extreme diffidence, and with the consciousness of the disadvantage under which he must appear after that "Account of the Embassy," to lay before the public the point of view in which he saw the Chinese empire, and the Chinese character. In doing this, the same facts will sometimes necessarily occur, that have already been published, for reasons that it would be needless to mention; but whenever that happens to be the case, they will briefly be repeated, for the purpose of illustrating some position, or for deducing some general inference. Thus, for instance, the document given to the Embassador of the population of China will be noticed, not however under the colour of its being an unquestionably accurate statement, but, on the contrary, to shew that it neither is, nor can be, correct; yet at the same time to endeavour to prove, by facts and analogy, that, contrary to the received opinion, the country is capable of supporting not only three hundred and thirty-three millions of people, but that it might actually afford the means of subsistence to twice that number. The confirmation, indeed, of new and important facts, though very different conclusions be drawn from them, cannot be entirely unacceptable to the reader; for as different persons will generally see the same things in different points of view, so, perhaps, by combining and comparing the different descriptions and colouring that may be given of the same objects, the public is enabled to obtain the most correct notions of such matters as can be learned only from the report of travellers.

With regard to China, if we except the work of Sir George Staunton, and the limited account of Mr. Bell of Antermony, which was not written by himself, it may be considered as unbeaten ground by Britons. We have heard a great deal of Chinese knavery practised at Canton, but, except in the two works abovementioned, we have not yet heard the sentiments of an Englishman at all acquainted with the manners, customs, and character of the Chinese nation. The voluminous communications of the missionaries are by no means satisfactory; and some of their defects will be noticed and accounted for in the course of this work; the chief aim of which will be to shew this extraordinary people in their proper colours, not as their own moral maxims would represent them, but as they really are—to divest the court of the tinsel and the tawdry varnish with which, like the palaces of the Emperor, the missionaries have found it expedient to cover it in their writings; and to endeavour to draw such a sketch of the manners, the state of society, the language, literature and fine arts, the sciences and civil institutions, the religious worship and opinions, the population and progress of agriculture, the civil and moral character of the people, as may enable the reader to settle, in his own mind, the point of rank which China may be considered to hold in the scale of civilized nations....